"They take the time to help us, instead of just throwing us in jail." An innovative program dubbed "homeless court" is helping the homeless in Redondo Beach.
KABC
By Jovana Lara 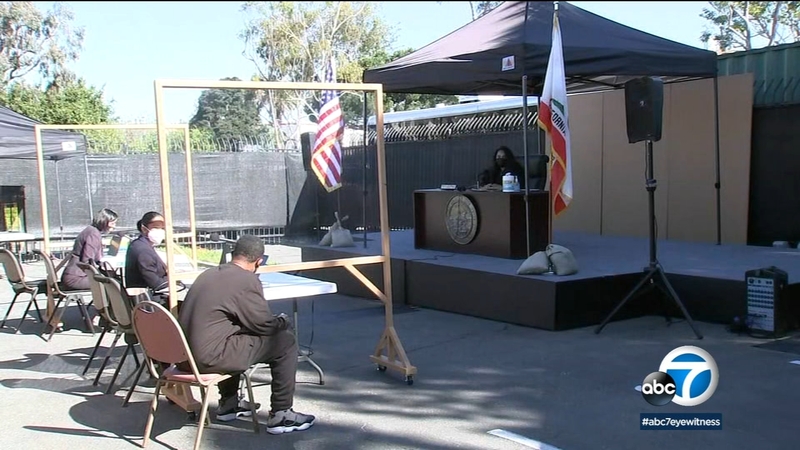 REDONDO BEACH, Calif. (KABC) -- Being homeless and on the streets can sometimes lead to a path of drugs, crime and arrest. But instead of putting the homeless in jail, one city's solution has taken a different approach: an unconventional court proceeding held outdoors dubbed "homeless court."

"It was hard. You never know where your next meal was coming from," said Scott.

Scott says she sifted through trash cans for recyclables to get by, and was arrested more than 150 times, all for misdemeanors. But now, thanks to homeless court, the unsheltered in Redondo Beach have a path to recovery and permanent housing.

"They take the time to help us, instead of just throwing us in jail," said Scott.

The goal of "homeless court" is to help participants get their charges dropped. They appear before the court monthly to share their progress and get new marching orders from the judge. Redondo Beach City attorney Mike Webb helped create homeless court with other Redondo Beach city officials in 2019.

"Our mission is to get people housing ready," said Webb.

The creators saw early success -- and then COVID hit, closing the Torrance courthouse and pausing the program for months, until city leaders rallied support to hold homeless court outdoors. On Sept. 9, 2020, they launched the first outdoor homeless court in the parking lot of the Redondo Beach Police Department's annex building, where a nearby church offers free hot lunches weekly.

"The real benefit is we're bringing the justice system to people experiencing homelessness, where they are," said Webb.

Other local cities are now taking note, creating their own homeless courts.

"I think it's fantastic. I think it's a new chapter in helping homeless people," said Scott.