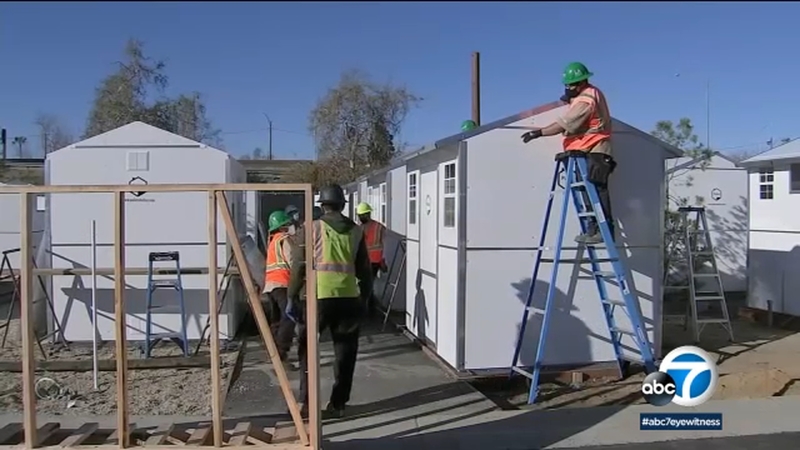 NORTH HOLLYWOOD, LOS ANGELES (KABC) -- A solution to shelter the homeless is being constructed with urgency in North Hollywood.

Krekorian represents the city's 2nd district, where the village of tiny homes is being built off Laurel Canyon Boulevard and the 170 Freeway. It's a site that's surrounded by homeless encampments and shuttered businesses.

The shelter project is a partnership with Pallet Shelters and the L.A. Conservation Corps. Corpsmembers are helping to build 425 new shelters across the city of Los Angeles. The North Hollywood site includes 103 shelters.

"This is just a quick solution, it's a Band-Aid, we acknowledge that," says Amy King, CEO of Pallet Shelters.

On Monday, Hope of the Valley opened L.A.'s first ever tiny homes community in North Hollywood to help fight the homelessness.

The 64-square foot shelters will be outfitted with a bed, electrical outlets, along with heating and air conditioning.

The dwellings will also have locks. King explains this is an important feature, because homeless individuals don't have access to locks when living on the streets.

"People that are sleeping outside on the streets have repeated trauma and PTSD from the concern of losing their things or being injured," says King. "This allows them to leave their things safely, locked, feel secure and go do what they need to do during the day."

"I think communities realize this is an immense improvement over the status quo," says Krekorian.

The project is expected to be finished in mid-April when outreach will begin for placement.