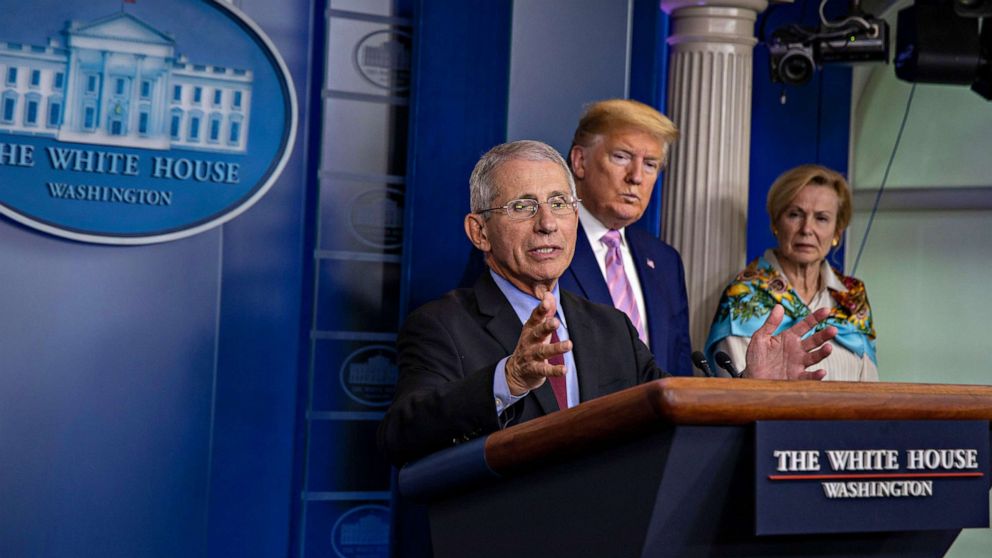 The White House coronavirus task force is seeking to get ahead of the growing debate over how it's responding to racial disparities in coronavirus deaths -- particularly the much higher numbers and percentages in black communities compared to states as a whole.

The disturbing development in the crisis has become more apparent -- and controversial -- as states and cities begin to release data showing deaths by race -- data that has continuously been requested on a national scale from members of Congress, leaders in the black community and members of the press.

On Wednesday, the Centers for Disease Control and Prevention provided some limited data, as political pressure to do so increased.

But while the portion of data released by the CDC did reveal racial disparities on a national scale, there were caveats. The data was pulled from a small sample size during a limited time frame -- 14 states during the month of March -- and race and ethnicity data was only available from 580 patients hospitalized for coronavirus, out of a total of 1,482 patients in the report.

Still, it's the largest amount of national data to have been provided so far -- and it sheds new light on racial disparities seen in cities and states across the country that have collected such data.

According to the CDC, even though the racial breakdown from the population in the report was 59% white, 14% Latino and 18% black, 45% of hospitalized coronavirus patients were white and 8% were Latino, while 33% were black, "suggesting that black populations might be disproportionately affected by COVID-19."

On Tuesday, Dr. Anthony Fauci, the nation's top expert on infectious diseases, explained the disproportionate effects on the black community as an "exacerbation of a health disparity." The same conditions that are far too prevalent in black communities also "lead to a bad outcome with the coronavirus," Fauci said.

"We have known literally forever that diseases like diabetes, hypertension, obesity and asthma are disproportionately afflicting the minority populations, particularly the African-Americans," Fauci said at the daily White House briefing Tuesday evening.

"So we are very concerned about that. It is very sad. It's nothing we can do about it right now, except to try and give them the best possible care to avoid those complications," Fauci said - undoubtedly a disappointing reality for black Americans who are suffering at higher rates than white Americans living in the very same town, city or state.

Fauci noted that crises, like the coronavirus, can often "shine a very bright light on some of the real weaknesses and foibles in our society."

"When all of this is over -- and as we said, it will end, we will get over coronavirus -- but there will still be health disparities which we really need to address in the African American community," Fauci said.

Experts like Spencer Overton, president of theJoint Center for Political and Economic Studiesand a professor at George Washington University Law School, say providing racial data on coronavirus is the first step to stopping the spread in communities that are most overwhelmed by cases - and beyond.

"Collecting and publishing such demographic data about the entire country are essential. This would allow communities affected the most to receive the support they need, slowing the virus's spread and saving lives," Overton wrote in an op-ed published by The Washington Post on Tuesday.

"The disproportionate impact appears to be attributable to preexisting conditions - high blood pressure, heart disease, diabetes and inadequate access to health care - that make African Americans more vulnerable to the disease. But the handful of examples above raises an urgent question: Does the effect hold true for African Americans throughout the country? Unfortunately, there's no way for the public to know," Overton wrote.

Overton noted the data released from Milwaukee, Chicago and Louisiana has focused national attention on the issue.

And in New York, Gov. Andrew Cuomo announced on Wednesday that new preliminary data showed the largest percentage of coronavirus deaths in New York City was among Hispanics. He, too, emphasized the need for more research to address the disparities across the board. Cuomo called for more testing in minority communities and more data research immediately.

"Why is it that the poorest people always pay the highest price?" Cuomo said. "Are more public workers Latino and African American? Who don't have a choice, frankly, but to go out there every day and drive the bus and drive the train and show up for work and wind up subjecting themselves to, in this case, the virus?

White and Asian Americans each had lower percentages of deaths compared to their populations in the city.

Cuomo highlighted another reason to collect data, which Overton wrote about as well: To help understand the social determinants that make it harder to avoid contracting coronavirus in poorer, often black communities, even though there is no medical research showing black communities are more susceptible to the virus, as White House coronavirus response coordinator Dr. Deborah Birx has repeatedly said.

"We don't want to give the impression that the African-American community is more susceptible to the virus. We don't have any data that suggests that," Birx said on Tuesday. "What our data suggests is they are more susceptible to more difficult and severe disease, and poorer outcomes."

"We really need to make sure that every household is aware of what it's going to take to protect the individuals in the household that have pre-existing conditions," she added.

Democratic members of Congress, including Sen. Elizabeth Warren and Rep. Ayanna Pressley, both of Massachussetts, as well as Rep. Robin Kelly of Illinois, Sen. Cory Booker of New Jersey and Sen. Kamala Harris of California, pointed out those socioeconomic factors in a letter to Human and Health Services Secretaty Alex Azar, who oversees the CDC, asking for public data on race and coronavirus.

"People of color are more likely to work in low-wage jobs that cannot be done remotely and to have fewer financial resources to draw on in the event of health problems or economic disruption," they wrote. Working from home is one of the guidelines the White House has recommended to stop the spread of coronavirus, but many low-income jobs like grocery store employee or delivery driver still require leaving the house, and are important roles in keeping communities fed.

"Moreover, unemployment, food insecurity and unstable or substandard housing conditions may further perpetuate disparities in health outcomes for people infected by the coronavirus, most specifically among low-income communities of color. These factors may all combine to accelerate the effects of the outbreak in the most vulnerable communities," the members of Congress wrote.

A number of nonprofits, including the NAACP and the African American Mayors Association, also wrote a letter directly to the head of the CDC, Robert Redfield, and the U.S. Surgeon General, Jerome Adams.

Asked about a possible solution on ABC's "The View" on Wednesday, Harris, the Democratic senator from California, said FEMA, which is handling federal response, could direct more resources to black and other minority communities that are already at a disadvantage as they fight coronavirus, both because of diabetes, asthma or other conditions that are more prevalent, and because now, testing and adequately prepared hospitals are harder to come by.

"Those who had pre-existing health conditions based on racial disparities, based on socioeconomic disparities, are doing even worse in the midst of this pandemic. And so it requires us to to address it in a way that also recognizes the historical nature of it," Harris said.