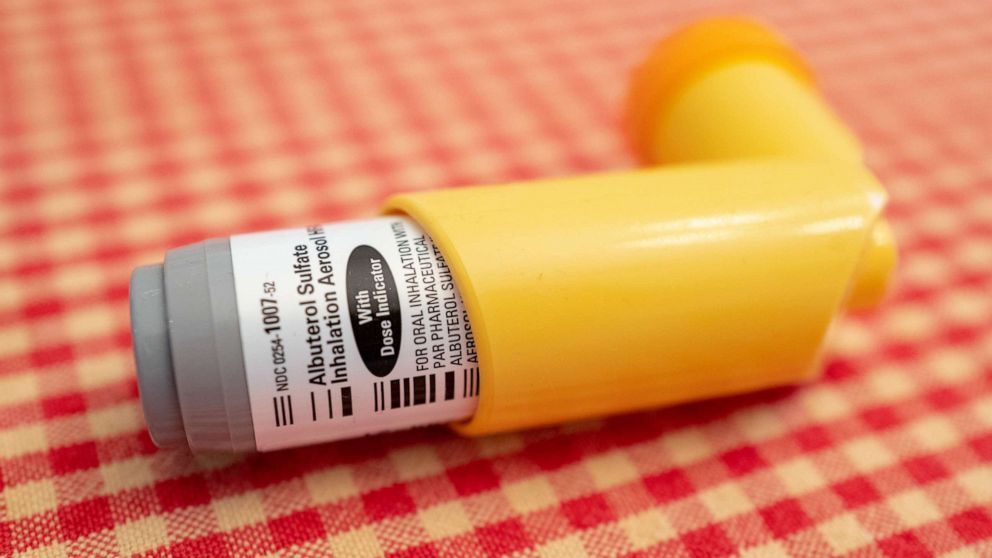 ABCNews
By JEFFREY COOK
When Brett Cavin went to a pharmacy last week in Gresham, Oregon, to pick up his inhaler prescription for his asthma, he was turned away and warned it could take up to a week for the pharmacy to replenish its supply. Cavin is not alone, according to doctors and pharmacists who spoke to ABC News.

As emergency rooms and intensive care units across the country begin to fill with patients with COVID-19, the respiratory illness caused by the novel coronavirus, hospitals and pharmacies have run into a new shortage: albuterol inhalers, a critical rescue medication that expands a user's constricted airways and allows them to breath more easily.

"We are deeply concerned about the albuterol inhaler shortage, as it is now being widely used to treat COVID-19 breathing issues," the American Pharmacists Association's Ilisa Bernstein told ABC News. "Patients, young and old, have long relied on albuterol inhalers for asthma and other breathing disorders. It's important for asthmatic patients to have these inhalers on-hand to manage sudden onset of symptoms."

Most people know albuterol inhalers for quickly treating asthma attacks or chronic obstructive pulmonary disease, a lung condition that arises from chronic smoking. But hospital doctors rely on albuterol for many causes of airway constriction or inflammation, including COVID-19. Typically, these doctors use a nebulizer, not an inhaler, which turns the albuterol into a mist and is then inhaled through a tube, for more effective delivery. But there is a growing concern -- so far unproven -- that using a nebulizer on a patient with COVID-19 might aerosolize not only the medicine but also the virus, creating a greater risk of disease spread within the hospital.

For this reason, inhalers have suddenly become the tool of choice in emergency rooms to quickly treat many patients who are struggling to breathe. It's caused a dramatically increased demand for the inhalers and resulted in the shortage seen by patients, according to the doctors and pharmacists who spoke to ABC News.

The American Pharmacists Association said some pharmacists are having to scramble for authorization to provide patients alternative medications because they don't have enough of the inhalers.

Cavin, 43, who was able to get his inhaler two days after his initial trip to the pharmacy, suffers from asthma and occasional shortness of breath. Without his inhaler, he worries his condition will force him to go to the emergency room, where there is the added threat of catching COVID-19.

"Without having an inhaler ... having shortness of breath can cause an immediate panic attack, which worsens the asthma attack and can cause a hospital trip by itself," Cavin told ABC News.

Long said that emergency rooms and hospitals are "already slammed" due to the novel coronavirus. As the number of cases peak in the coming weeks, the demand for beds is expected to go beyond capacity.

GlaxoSmithKline, one of the largest manufacturers of albuterol, told ABC News it is "proactively assessing existing contingency plans, which include increasing production" after the company experienced an heightened demand.

Teva Pharmaceuticals, another manufacturer, said it is seeing "historic" demand for the drug "likely as a result of the current COVID-19 pandemic," and that it is producing at maximum capacity.

Both GlaxoSmithKline and Teva said they do not anticipate an interruption to supply.

Merck, another major manufacturer of albuterol inhalers, did not respond to requests for comment from ABC News.

None of the three manufacturers would quantify the increase in demand or the level of their supply.

Cardinal Health, a distributor of the medication, said it has implemented a "fair share" allocation process but also would not quantify the increased demand.

For the 25 million people in the United States with asthma, a condition that can be life-threatening and the population most often in need of albuterol, COVID-19 may pose a higher risk of causing serious illness. The infection can affect the function of the respiratory tract, cause an asthma attack and/or possibly lead to pneumonia and acute respiratory disease, according to the Centers for Disease Control and Prevention.

Amid the pandemic, Dr. Michael Blaiss, the executive medical director of the American College of Allergy, Asthma and Immunology suggests that anyone who suffers from asthma ensure that they have a proper supply of their medication.

"Anybody's gonna get concerned if they call their pharmacist and they can't get their inhaler," Blaiss said.

If the pharmacy is out of albuterol, Blaiss suggested talking to your physician about prescribing a nebulizer for use at home so long as you're not showing symptoms of COVID-19. He also suggested talking to your doctor about your medications to prevent an asthma attack.
Report a correction or typo
Related topics:
abc newsnational
Copyright © 2020 ABC News Internet Ventures.
More Videos
From CNN Newsource affiliates
TOP STORIES