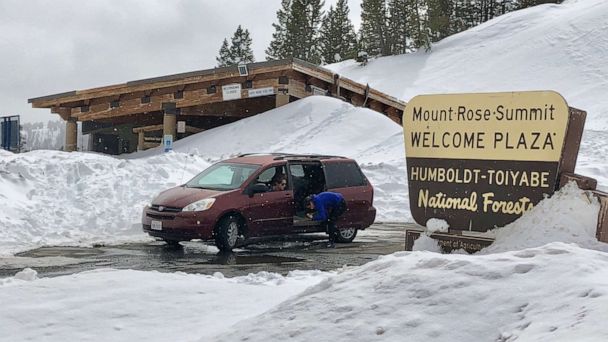 Up to 5 inches of rain fell over the weekend in southern California in Santa Barbara County causing some localized flooding. In the city of Santa Barbara, a daily record rainfall yesterday of 1.12 inches was recorded.

In the San Francisco Bay area 5.2 inches of rain fell over the weekend, with Monterey getting 1.21 inches which is more than their average monthly rainfall.

In the Sierra Nevadas, there are snowfall totals approaching 2 feet now with more on the way.

In the mountains from southern California to the Sierra Nevadas, another few feet of snow is expected with a total snowfall by the middle of the week near 4 feet. Snow could even fall on interstate 5 outside of Los Angeles near Grapevine.

Part of the western storm will break off and move across the country with severe weather forecast Tuesday into Wednesday.

Severe storms are also possible Tuesday night from just south of Chicago to Louisville and into Indianapolis, Cincinnati and Columbus.