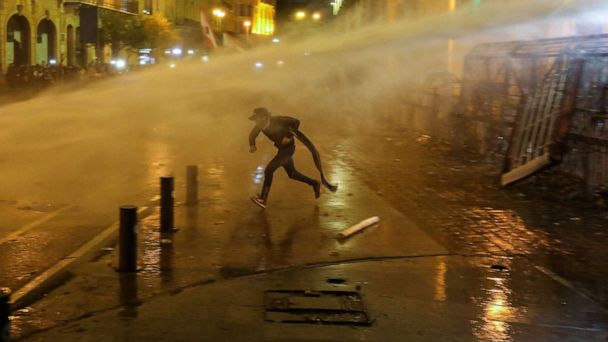 ABCNews
By MATT MCGARRY
BEIRUT, LEBANON -- Pictures from downtown Beirut Sunday night showed an extraordinary standoff between fed up protesters and riot police protecting a ruling class protesters say is out of touch and slowly losing control of the nation.

At least 114 people were injured, according to the Red Cross and Lebanese Civil Defense teams, with 47 taken to hospitals for treatment. Most of the wounds were from rubber bullets, some in the face and upper body, they say.

Scores of anti-government protesters hurled rocks and water bottles and shot fireworks at security forces, who barricaded themselves behind steel fences in a narrow street leading to the country's Parliament building. Each side hoping the other would give up and go home, yet no one was willing -- just yet -- to resort to wholesale destruction.

Amid the turmoil, 24-year-old American freelance journalist Nicholas Frakes from Rancho Cucamonga, California, was arrested by security forces while taking photographs of the clashes.

Lebanon's state news service announced that Frakes was arrested for allegedly livestreaming rioting in Beirut to the Israeli newspaper Haaretz. Lebanon is technically still at war with Israel and forbids anyone in Lebanon from doing business with Israeli organizations or visiting Israel.

ABC News was told by a friend, who asked to be identified only by her first name, Dana, that Frakes called her early Monday morning from the Ministry of Defense and said he was being interrogated. Dana told ABC News that Frakes denies the charge and she hadn't heard from him since that phone call.

This past weekend saw the worst days of violence in Beirut so far in a new, vicious downturn after several months of largely peaceful protesting. Police responded with multiple volleys of tear gas, water cannons and rubber bullets, but so far refrained from firing live rounds.

On Sunday afternoon, dozens of protesters moved in close to the barriers, with some trying to climb over. Hundreds more gathered further down in the main street outside the Parliament, some chanting "revolution."

Lebanon's protests started in October and lulled briefly over the holidays but are now back with renewed vigor. People filled the streets again last week, burning tires and blocking roads, angry at a political class that they say has steered Lebanon into its worst economic crisis since the 1975-1990 civil war.

The sacking of banks and shopfronts by protesters is a new and disturbing development, and so is what appears to be the heavy-handed response by police; neither had been seen yet on this scale. On Saturday night, Lebanon's President Michel Aoun cranked up the pressure by calling in armed forces to patrol the streets to protect private property and "peaceful" protesters, apparently drawing a line between behavior that will be tolerated and behavior that will not.

Lebanon has been without a working government since Prime Minister Saad Hariri stepped down in October in response to demonstrator demands, yet, little has been done to kick-start new leadership.

The United Nations representative in Lebanon, Jan Kubis, described the past few days of unrest as "vandalism, violence and escalating security incidents, another day of protests notably of young people angry that their demands for decent future are summarily ignored, with growing number of desperate people unable to cope with the economic crisis."

Those voicing opposition to the ruling elite say their patience is running thin. Despite nearly four months of peaceful demonstration demanding a new reform government, their wishes have not been met.

First, they want early elections and a whole new Parliament made up of educated professionals with no background in politics. The politicians who have ruled the country for the past 30 years, they say, are bloated with corruption and abuse of power. The young people of Lebanon who see little chance of a bright future under the current system want them all removed; the most common chant heard in the streets is, "All means all."

Secondly, they want massive reforms to outlaw corruption and wipe away a sectarian political power-sharing system that they say fosters backroom deals in favor of transparency and public accountability.

Yet instead of real reform, they say the same politicians appear to be maneuvering behind the scenes to re-position themselves in a new government without losing any power or control.

The driving force behind all of this is a frantic sense that the nation's economy is teetering so far to complete collapse that it could default at any time. The national currency is losing value, Lebanon's credit rating is worse than junk, inflation is going up and people are losing jobs.

Lebanon is one of the world's most indebted countries, with a national debt of $74.5 billion, which is 140% of GDP with a budget balance of -7.4% per year. The situation is getting desperate and there is a growing sense of impending doom.

For the past decade, Lebanon's banks have sought to attract foreign currency -- and U.S. dollars in particular -- by offering unusually high interest rates for depositors at an average of 7% or more. In 2016, the last time the country faced a downturn in foreign currency injections, the central bank offered 20% interest on dollar sums deposited in local banks for as little as one year.

It was a sleight of hand financial policy promising big payouts, while in reality all of those invested dollars were secretly rerouted elsewhere -- with the help of the central bank -- and have now largely disappeared, leaving Lebanon's shaky economy to completely unravel. A report released in November by Lebanese think tank Triangle called the country's "decrepit and untenable" financial system "a regulated Ponzi scheme which has benefited the banking sector and left the rest of the Lebanese to foot the bill."

Without any guidance from the nation's leaders, the only hope the banks had of surviving was to institute their own strict currency controls by limiting depositor withdrawals to no more than $200 per week.

The big question now is, even if the government somehow delivered early elections and miraculously formed a cabinet made up entirely of professionals without sectarian or political pasts, would they even be able to save the country from economic catastrophe? At this point it doesn't look likely.
Report a correction or typo
Related topics:
abc newsnational
Copyright © 2020 ABC News Internet Ventures.
More Videos
From CNN Newsource affiliates
TOP STORIES