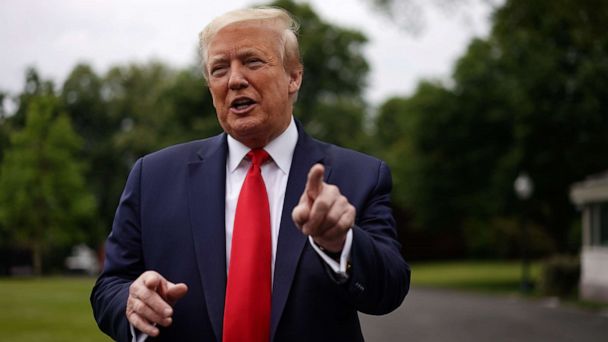 After researchers at Columbia University this week estimated about 36,000 lives in the United States could have been saved from the novel coronavirus had social distancing and other restrictions been put in place a week earlier in March, the White House on Thursday pointed a finger at China, and the president called it a "political hit job."

Disease modelers at Columbia University said in a study released Wednesday that 61.6% of deaths and 55% of infections nationwide could have been avoided if preventative measures in place on March 15 had been enacted a week earlier. That equates to about 35,927 deaths and 703,975 cases.


Asked about the study on Thursday, President Donald Trump said "Columbia's an institution that's very liberal," and without providing any evidence, added, "I think it's just a political hit job, if you want to know the truth."

"I was so early," he told reporters outside the White House, defending his administration's response to the virus. "I was earlier than anybody thought."

The study has not yet undergone the typical scientific peer review process, and all models are merely estimates, subject to change with new information.

Nevertheless, the Columbia researchers determined that if the measures had begun two weeks earlier, then 82.7% of deaths and 84% of infections -- or about 53,990 deaths and 960,937 cases -- could have been prevented nationwide, they found.

Trump has faced widespread criticism for his administration's slow response to the pandemic, with the president downplaying the threat even as deaths and infections shot up across the country. In turn, the president has frequently accused China and the W.H.O. failed to adequately inform the world about the burgeoning outbreak of COVID-19 in China's Wuhan province.


"What would have saved lives is if China had been transparent and the World Health Organization had fulfilled its mission," White House deputy press secretary Judd Deere said in a statement earlier Thursday.

Trump has often cited his decision in late January to block most travelers who had recently spent time in China from entering the United States, although his administration did not enact similar restrictions on travel from Europe until March 14, or recommend widespread social distancing in the United States until March 16.

In an interview with Fox Business Network Thursday morning, Vice President Mike Pence pointed to the United States' restrictions on travelers coming from China and Europe, although he stopped short of pointing a finger at China or the W.H.O. He noted the White House launched a task force to deal with the virus, too.

"We bought an extraordinarily important amount of time so that in early March we actually had only some 14 cases of domestic transmission of -- of actual spread in the United States," Pence said.

But subsequent research has shown that COVID-19 was likely far more widespread in the United States in early March -- and before -- than that low case count revealed.


"What did save American lives is the bold leadership of President Trump, including the early travel restrictions when we had no idea the true level of asymptotic spread," Deere, the White House spokesman, said. He pointed to the private sector's work on delivering "critical supplies to states in need and ramp up testing across the country that has placed us on a responsible path to reopen our country."

While the federal government was slow to recommend social distancing measures, it was governors and local officials who called the shots and who, in many cases, acted more quickly.

A White House official said the "success" of responding to COVID-19 "has been built on the federal-state partnership, not a federal government coming in and telling governors and mayors what decisions to make for their communities when a bureaucrat in Washington has [no] idea what is best for them."

While Trump has repeatedly said he prefers governors take the lead on testing and rolling back restrictions, he has also frequently attacked Democratic state leaders -- often in political battleground states key to his reelection later this year -- for moving too slowly.