Tulsa searches for remains of victims of 1921 race massacre 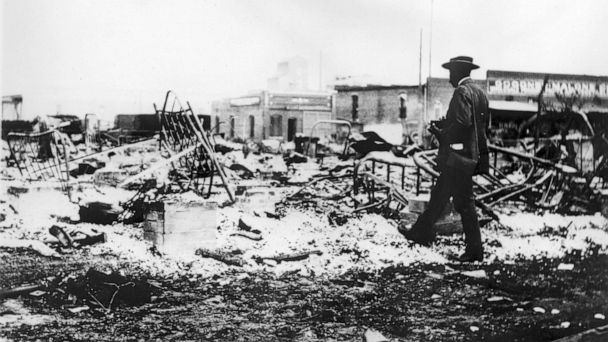 ABCNews
By KARMA ALLEN
Tulsa officials announced plans this week to dig for mass graves that may have been used to dispose of African American victims of the city's race massacre nearly 100 years ago.

Archaeologists will conduct a test excavation at the city's Oaklawn Cemetery in April in hopes of locating remains of those killed in the 1921 massacre that claimed the lives of hundreds, city officials said in a statement Tuesday.

The plan was announced during the city's Mass Graves Investigation Public Oversight Committee meeting on Monday as a part of an ongoing search for victims.

As many as 300 people died over the course of 16 hours between May 31 and June 1, 1921, as mobs of angry white residents set fire to commercial buildings and homes in the city's prosperous Greenwood neighborhood -- a predominately black business district that was nicknamed the "Black Wall Street."

City officials said they don't expect to exhume any human remains during this phase of the investigation. They said they chose the area after an initial geophysical investigation identified "a large anomaly consistent with a mass grave."

"This feasibility study would establish the presence or absence of human remains, determine the nature of the interments and obtain data to help inform the future steps in the investigation, including appropriate recovery efforts," city officials said in a statement Tuesday. "The Physical Investigation Committee will provide the report of their findings at a future Public Oversight Committee meeting."

Kary Stackelbeck, a state archaeologist, said the results of the test excavation at Oaklawn will help determine the next steps of the investigation, including appropriate recovery efforts if bodies are discovered.

"This is critical here because this is a very complicated process," Stackelbeck said during the Monday committee meeting. "We know that there is something that has generated differences in the soil that's generating a different signal in the soil there and it seems very consistent with a large intentionally excavated hole with straight sides on it."

She said the test excavation will provide more detail than geophysical surveys. The surveys indicated evidence that there could be something buried inside the pit, but the geophysical data could not detect whether or not they are bodies, Stackelbeck said.

"The geophysical data does not tell us whether there are people in there, how many people would be in there, if they're buried in coffins, if they're not buried in coffins," Stackelbeck said. "We simply cannot glean that information from the geophysical data."
Report a correction or typo
Related topics:
abc newsnational
Copyright © 2020 ABC News Internet Ventures.
More Videos
From CNN Newsource affiliates
TOP STORIES