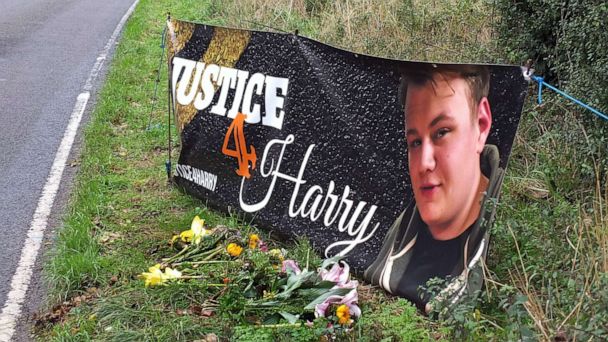 ABCNews
By ELLA TORRES
Authorities in Britain have formally requested the extradition of Anne Sacoolas, the wife of an American diplomat, who was charged in the death of a British teenager.

A spokesman for the Home Office, the government body responsible for policing and internal affairs, announced the request Friday, saying it is now up to U.S. authorities. The move appears to have deepened tensions between the U.K. and U.S. over the incident.

The U.S. State Department called the extradition request "highly inappropriate" and said it would establish "an extraordinarily troubling precedent."

Sacoolas, a 42-year-old U.S. citizen, is believed to have been driving the car that crashed into 19-year-old Harry Dunn while he was riding his motorcycle on a roadway in the village of Croughton, England, on the night of Aug. 27, 2019.

Dunn was taken to a hospital in the nearby city of Oxford, where he died soon after, according to Northamptonshire Police. The car that hit him was driving in the opposite direction on the wrong side of the road, police said.

Sacoolas returned to America in the wake of the crash and claimed diplomatic immunity, sparking a diplomatic rift between the U.S. and the U.K. She was formally charged with causing death by dangerous driving in December 2019.

The U.S. State Department issued a statement Friday, making clear that the government is standing by its notion that Sacoolas had immunity at the time.

"The United States has a strong law enforcement relationship with the UK and, in particular, a strong track record of close cooperation on extradition matters," according to a spokesperson from the State Department. "However, under the circumstances of this case, we strongly believe that an extradition request would be highly inappropriate."

An attorney for Sacoolas, Amy Jeffress, said in a statement that the U.S. government "has made clear they will deny any extradition request and will uphold the longstanding agreement of diplomatic immunity between our two countries."

Jeffress said Sacoolas continues to grieve for the Dunn family "and would do anything she could to bring Harry back." Sacoolas wrote a written apology to Dunn's family following his death.

"We remain willing to work with the UK authorities to identify a path forward," according to the statement.

U.K. police traveled to the U.S. to interview Sacoolas in October and President Donald Trump spoke out about the incident, describing it as a "terrible accident" engulfed in a "very complex issue" due to Sacoolas' claim of diplomatic immunity.

A review commissioned by the British foreign secretary, Dominic Raab, concluded it is "considered the anomaly that family members of U.S. officers serving at the Annex at RAF Croughton have, under current arrangements between the U.K. and the U.S., greater protection from UK criminal jurisdiction than the officers themselves."

The crash occurred less than a mile from Royal Air Force Croughton, commonly known as RAF Croughton, which is a British military station that houses an intelligence-gathering base operated by the United States Air Force. Sacoolas's husband is a U.S. diplomat assigned to the United Kingdom.

The Dunn family said the extradition request was "a huge step towards achieving justice for Harry," according to a statement issued on their behalf by attorney Radd Seiger.

"This will not of course bring Harry back, but in the circumstances of all that this family have been through, they are pleased with the development," the statement read.

Seiger noted that despite "unwelcome public comments currently emanating from the US administration that Anne Sacoolas will never be returned," the Dunns are looking ahead at the impending legal process.

"They will simply take things one step at a time and not get ahead of themselves," Seiger said in the statement. "However, no one, whether diplomat or otherwise, is above the law."