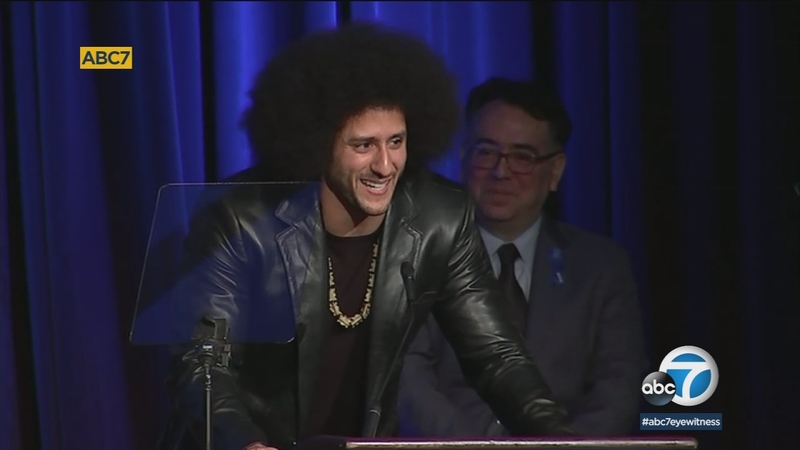 BEVERLY HILLS, Calif. (KABC) -- The ACLU of Southern California paid tribute on Sunday to former NFL quarterback Colin Kaepernick and a host of Hollywood figures for their participation in battles for civil rights.

Kaepernick was a surprise recipient not announced prior to the organization's annual Bill of Rights dinner in Beverly Hills.

Other honorees at the annual Bill of Rights Dinner ran the gamut from labor leaders to leading ladies.

The group presented Kaepernick with its Eason Monroe Courageous Advocate Award, noting he risked his job when he started protests during the national anthem prior to football games.

"We all have an obligation no matter the risk, and regardless of reward, to stand up for our fellow men and women who are being oppressed with the understanding that human rights cannot be comprised," Kaepernick said as he accepted the award.

Kaepernick was the quarterback for the San Francisco 49ers from 2011 until 2016 when he began kneeling as the national anthem was played before games, a protest meant to highlight racial inequality in this country.

When the season ended, he opted out of his contract and has not been hired by another team, a situation that many attribute to concerns over his political stance rather than his playing ability.