The suit claims curfews are a violation of the First Amendment because they suppress all political protests in the evening hours.
KABC 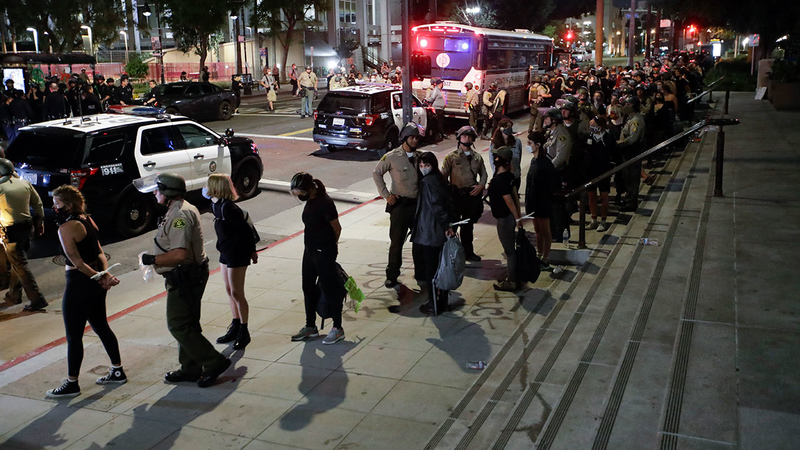 LOS ANGELES (KABC) -- The American Civil Liberties Union is suing the city of Los Angeles and the county over curfews imposed after several protests were held in response to police brutality and the death of George Floyd.

The ACLU filed suit on behalf of Black Lives Matter-Los Angeles and others, including individual journalists and protesters. The suit was also filed against the city of San Bernardino.

The suit claims the curfews are "draconian" and a violation of the First Amendment because they suppress all political protests in the evening hours. It adds that restricting movement outside of working hours is a violation of the Constitution's protection of freedom of movement.

A local pastor received a lot of attention for a video he posted online about protests against racial injustice and is now calling for non-violent protests.

"The City and County of Los Angeles are attempting to use these curfews to suppress Black Lives Matter - L.A.'s right to protest," Melina Abdullah, a BLM-L.A. co-founder said in a statement. "They are attempting to suppress our ability to fully mobilize and focus full attention on the true issue of concern in the protests - police violence against Black people."

The organization also asserts the curfews have prohibited activities such as "grocery shopping, recreational activities, visiting loved ones and in some cases even seeking medical treatment."

Two protesters shared with ABC7 a passionate speech about racial inequality in America and their reasons for joining Sunday's protests over the in-custody death of George Floyd.

"I believe the curfews in LA County were needed Sunday night and Monday night - but now it seems like they are being used to arrest peaceful protesters," Hahn said on Twitter. "I don't think they are needed anymore."

Peaceful protests on Saturday spiraled into outbursts of looting in places such as the Fairfax District, which prompted the city of Los Angeles to issue a curfew. A countywide curfew was imposed the following day.