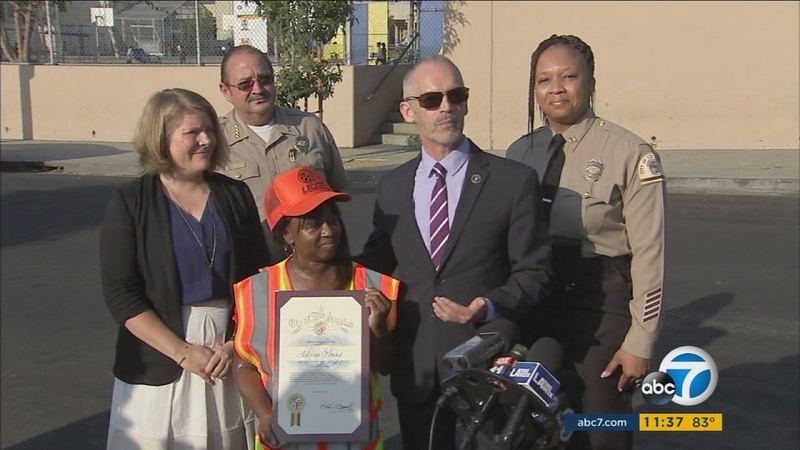 EAST HOLLYWOOD, LOS ANGELES (KABC) -- A crossing guard at an East Hollywood elementary school was being honored on Wednesday for rescuing an 8-year-old girl from an attempted abduction.

She may not be very tall, standing at 4 feet 8 inches, but crossing guard Adrian Young used all her might to fight off a woman who attempted to kidnap a child from Alexandria Avenue Elementary School.

"The little girl just started screaming, she was like, 'Please, don't let her take me, I don't know her, she's not my mom,'" said Young. "I just told her to grab onto me as tight as she could, and I held onto her and the lady just began to attack me, so I just thought about attacking her to make sure she can't take this little girl."

Young was being recognized for her heroism but said she was just doing what any mother would.

"I kind of went into mother mode at the time, and as a crossing guard, because I couldn't see myself letting this little girl be taken," Young added.

While the child's mother is grateful for Young's heroic work, she said more needs to be done to keep children safe at the campus.

"To me, I didn't feel that they did what they needed to do to keep my child safe, and apparently they seemed like they didn't care because, thankfully, someone helped her," said mother Sharon Arellano.

Thanks to the description of the kidnapper given by Young and the student, an arrest was made.

The suspect, later identified by the LAPD as 50-year-old Maria Ramirez, was charged with attempted kidnapping, according to Mitch O'Farrell of the 13th council district.