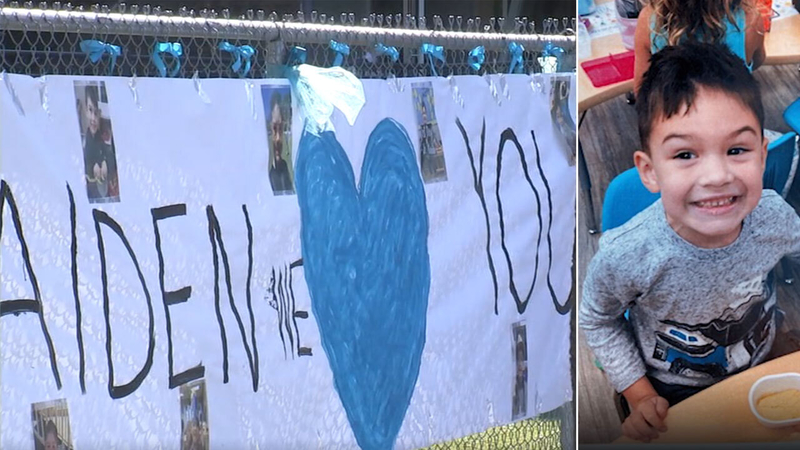 Aiden Leos' memory honored by OC school where he was student

YORBA LINDA, Calif. (KABC) -- The school where Aiden Leos was a student honored his memory days after the 6-year-old was shot and killed during an apparent road rage incident in Orange.

Small ribbons and a sign that read "Aiden, we love you" lined the fence outside Calvary Chapel in Yorba Linda Monday morning as other parents dropped off their children for class.

Both tributes to Aiden featured his favorite color: turquoise.

"It became even more real. It's really close to home and we are a very small community here," said parents Kari Borg.

"My heart goes out to the family. It's a great community, as you can see... all the turquoise out there. It's just heartbreaking," said John Pommier, another parent at the school.

Aiden's mother, Joanna Cloonan, spoke out over the weekend and called for justice for her son. She was driving him to school Friday morning on the 55 Freeway in Orange.

Authorities are still searching for the suspects, believed to be a man and woman, who escaped in a white sedan, possibly a Volkswagen. Anyone who may have information is asked to call the CHP's Santa Ana office at (714) 567-6000. Tips can also be sent via e-mail to santaanachptipline@chp.ca.gov.

Meanwhile, Aiden's family says they are considering using extra money raised through GoFundMe accounts to offer a reward for information that leads to an arrest.

"I want to find them and I want there to be justice served for my son," Cloonan said.