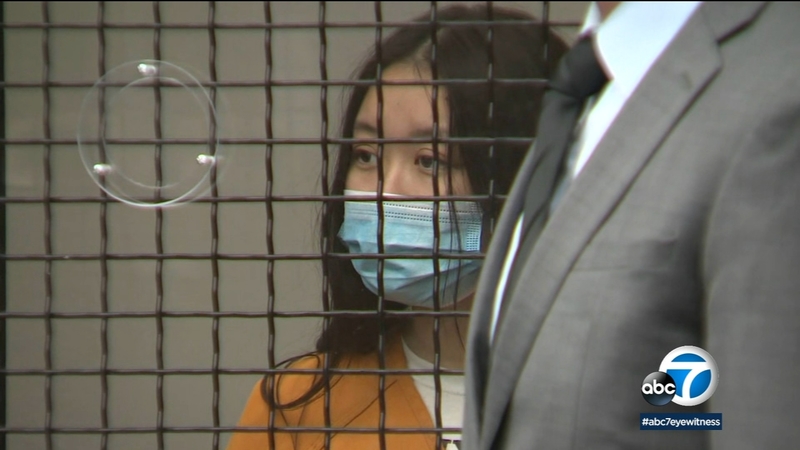 SANTA ANA, Calif. (KABC) -- A judge on Friday reduced bail from $500,000 to $100,000 for the woman accused being the driver in the shooting of 6-year-old Aiden Leos, a boy who was killed in a suspected road rage shooting on a freeway in Orange County.

Her 24-year-old boyfriend, Eriz, remained jailed without bail. He is alleged to have fired the fatal shot from Lee's vehicle while she was driving May 21 on the 55 Freeway in Orange.

According to court documents, Lee's vehicle cut off Cloonan in the HOV lane on the northbound side of the freeway, and Lee threw up a "peace sign" gesture with her hand as she drove off with Eriz in her white Volkswagen.

Aiden's mother then drove behind the defendants for a few miles, but when she exited to merge onto the eastbound 91 Freeway he was still angry about being cut off and she put up her middle finger at the two suspects as she passed. That is when Eriz allegedly opened fire. The shot struck Aiden, who was sitting in a booster seat.

Investigators are asking for the public's help as they try to determine whether a couple charged in the murder of 6-year-old Aiden Leos on an Orange freeway were involved in any other road rage incidents.

The boy's mother and teenage sister were in court Friday morning. Senior Deputy District Attorney Whitney Bokosky said they were concerned for their safety if Lee were to make bail.

In agreeing to reduce bail, Orange County Superior Court Judge Larry Yellin noted that Lee is not directly accused of committing any type of violent act and has no criminal history. However, he added that even after the shooting, Lee allowed Eriz to continue riding in her car with a gun, which he allegedly brandished at another motorist days after Aiden's death.

"Allowing that gun and that person back in her car and committing what appears to be another crime ... that is concerning when I consider the danger to the public and to the victim,'' Yellin said.

Lee's attorney, Tom Nocella, had asked that bail be reduced to $50,000. But Yellin said the additional road rage allegation was a factor in setting it at double that amount.

Lee will be restricted to the home of her parents if she is released, but she would be allowed to go to counseling appointments. Yellin told her that she would not be allowed to drive because "both of the most concerning acts of this case were when you were behind the wheel of the car.''

"You have our sympathies,'' Yellin said. "What a tragic and horrible thing."

On Monday, authorities asked for the public's help as they try to determine whether Eriz and Lee had been involved in any other road rage incidents.

The Orange County district attorney's office set up a dedicated hotline for tips at (714) 834-7000. Information about the suspects and prior firearm brandishing incidents can also be emailed to tips@da.ocgov.com.