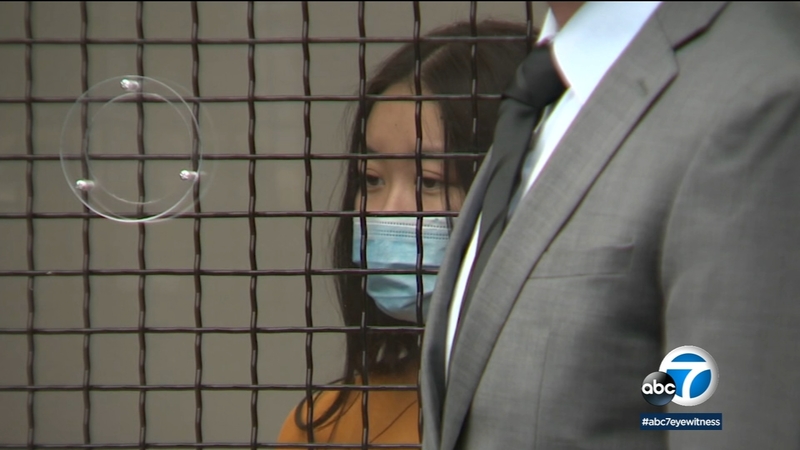 SANTA ANA, Calif. (KABC) -- Investigators are asking for the public's help as they try to determine whether a man and woman charged in the murder of 6-year-old Aiden Leos on an Orange freeway were involved in any other road rage incidents.

The man accused of firing the shot that killed Aiden, 24-year-old Marcus Anthony Eriz, was ordered Friday to remain jailed without bail.

Wynne Lee, 23, who is charged as an accomplice in the shooting that killed Aiden, remains jailed on $500,000 bail, although she was ordered to return to court this coming Friday for another bail hearing.

Aiden was shot on May 21. During the week of May 24-28, Eriz and Lee got into another "altercation on the freeway,'' prosecutors said.

The couple accused in the road-rage shooting that killed 6-year-old Aiden Leos have pleaded not guilty to the charges against them.

"As Wynne Lee was driving on the 91 eastbound on the way to work with defendant Eriz as her front passenger, a driver in a blue Tesla did something to make defendant Eriz angry, acting aggressively,'' prosecutors alleged.

"Defendant Eriz again took out his gun and brandished it to the driver of the Tesla. That driver told the defendants that he had called the police and then he drove away.''

Eriz then hid the car in a relative's garage and instead started using a red truck, shaved his beard and began pulling back his hair, prosecutors said in court documents.

The incidents would have occurred between December 2020 and June 2021.

The DA's Office has set up a dedicated hotline for tips at 714-834-7000. Information about the suspects and prior firearm brandishing incidents can also be emailed to tips@da.ocgov.com.

On Friday, Orange County Superior Court Judge Larry Yellin cited the alleged incident on the 91 Freeway in his decision to refuse bail for Eriz, calling his actions "alarming.''

"I would think any self-reflection of the crime ... or a gun revulsion or thoughtfulness of going down that route again'' would have occurred to the defendant following the shooting of the boy, Yellin said. "Mr. Eriz does seem to be a complete danger to society. There's a substantial threat to the community if Mr. Eriz gets out.''

The judge ordered the court's pretrial services officials to do a background check on Lee to set a bail for her.

Lee's attorney Tom Nocella argued that according to the law, his client's bail should be $20,000 to $25,000. Her parents are prepared to post the bail and provide a residence for her, Nocella said.

Senior Deputy District Attorney Whitney Bokosky argued that Lee also represented a threat because she knew her boyfriend had a weapon in her car and allowed him to continue keeping it in the vehicle after the boy was killed.

"She's not as dangerous as (Eriz), but she is dangerous,'' Bokosky said.

Orange County District Attorney Todd Spitzer argued that Lee instigated the road rage incident by cutting off the victim and that "her boyfriend was trying to conceal his identity'' after the shooting.

Lee was also part of "secreting'' her car during the "manhunt'' for the boy's killer, Spitzer said.

Aiden was shot as his mother, Joanna Cloonan, was driving him to kindergarten in her Chevrolet Sonic on the 55 Freeway. At about 8 a.m. that day, the two allegedly were cut off by the defendants, who were in a Volkswagen Golf SportWagen.

Lee was behind Cloonan in the HOV lane before swinging over to the fast lane and then accelerating at an "extremely high rate of speed'' to get in front of Cloonan, prosecutors contended in a bail motion filed Wednesday and first obtained by City News Service.

"Wynne Lee motioned to the victim vehicle a peace sign' with her hand and continued driving,'' prosecutors said in the motion for higher bail.

A few miles later as Cloonan was attempting to merge over to the 91 Freeway east, she passed the defendants and was "still angry about being cutoff and put up her middle finger at the two as she passed,'' prosecutors said.

"She then heard a loud bang to the rear of her vehicle and heard her little boy in the backseat say, 'Ow,' '' prosecutors said.

In an interview with investigators on June 6, Eriz said he "was angry after being flipped off' by Ms. Cloonan, so he grabbed his loaded Glock 17 9mm and racked a round,'' according to the motion.

"He then rolled the passenger window down and took a shot at her vehicle. After shooting the victim, the defendants continued on to the 91 eastbound and on to work in the city of Highland.''

Eriz and Lee both pleaded not guilty to the charges stemming from the shooting, and a pretrial hearing was set for Aug. 27.