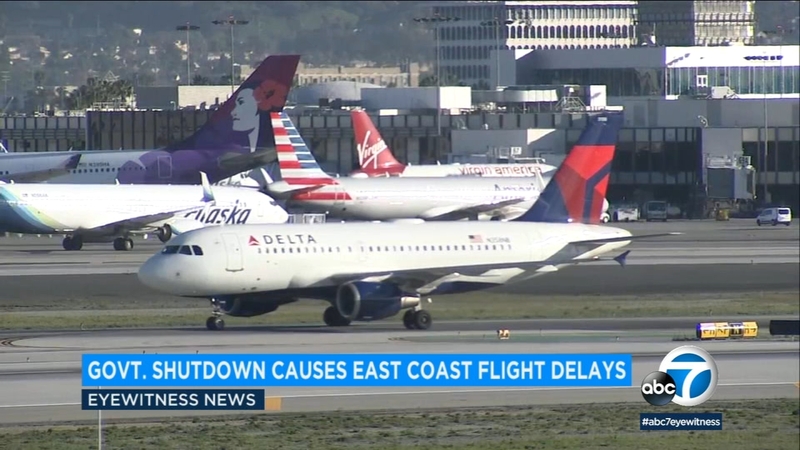 NEW YORK (KABC) -- Delays were reported at several airports, including LaGuardia, Newark, as well as airports in Philadelphia and Florida, due to air traffic controller staffing shortages due to the government shutdown.

The Federal Aviation Administration said the slowdown was due to staffing shortages in Washington and Jacksonville on Friday. This was before President Donald Trump announced that he would be signing legislation to temporarily end the shutdown until Feb. 15.

An FAA spokesperson told ABC News that the most critical staffing shortage was the Washington shortage, which affects New York airspace in terms of in-going and out-going flights.

The slowdown impacted flights paths nationally, specifically on the East Coast. Los Angeles International airport did not immediately see any widespread delays as a result.

"This is exactly what AFA and other aviation unions have been warning would happen. The aviation system depends on the safety professionals who make it run. They have been doing unbelievably heroic work even as they are betrayed by the government that employs them. They are fatigued, worried, and distracted - but they won't risk our safety. So the planes will stay on the ground. This is anything but a sick out - it is only about our safety and the air traffic controllers' absolute commitment to it. "Do we have your attention now, Leader McConnell? All lawmakers? Open the government and then get back to the business of democracy to discuss whatever issue you so choose. This shutdown must end immediately. Our country's entire economy is on the line."

Air traffic controllers, whose numbers were already at a 30-year low, have been working without pay for 35 days, because of the partial government shutdown.

"We have experienced a slight increase in sick leave at two air traffic control facilities affecting New York and Florida. As with severe storms, we will adjust operations to a safe rate to match available controller resources," FAA spokesman Gregory Martin wrote ABC News in an email.

"We've mitigated the impact by augmenting staffing, rerouting traffic, and increasing spacing between aircraft as needed. The results have been minimal impacts to efficiency while maintaining consistent levels of safety in the national airspace system. The public can monitor air traffic at fly.faa.gov and they should check with airline carriers for more information," Martin said.

“The President has been briefed and we are monitoring the ongoing delays at some airports. We are in regular contact with officials at the Department of Transportation and the FAA.”
- @PressSec

MORE: A look back at other recent federal government shutdowns

Before 2018, the federal government experienced more than a dozen prior shutdowns and funding gaps.

The staffing issue had travelers at LAX wondering about safety.

"The fact that people who are supposed to be responsible for our safety on planes aren't getting paid is insane. It's ridiculous," said Kelsey Worth, who was traveling through LAX on Friday.

Some insist the shutdown may be worth it if it increases border security.

"I'm from San Diego, a border city, and a lot of people there agree with it. The Border Patrol agree with it, a lot of the residents agree with it," said David Esquivel, who was also traveling through LAX Friday.

Meantime, the Transportation Security Administration said employees who worked during this pay period and making less than $90,000 will be paid for one week. That would cover all the screeners, if they worked. This action is aimed at paying the screeners and keep them on the job as the shutdown continues, TSA officials said.

In addition, employees who were exempted and not furloughed making up to $90,000 will be paid. This means that more than 51,000 TSA screeners and employees will be paid for at least one week from the past month, if they worked the week of Dec. 23 - Jan. 5.

At the security checkpoint, the shutdown may be taking a toll on moral. One sure sign of that is the absentee rate - normally it hovers around 3 percent. Last week, it jumped to close to 10 percent.

Some airports have seen increased passenger security check times since the shutdown started.

Also, some travelers know firsthand what the federal employees are dealing with.

"My dad works for the government, and it's definitely impacting my family a lot," said Worth. "He's not getting paid, and I think it's, what really bothers me the most that I get so angry about is the fact that our congressmen are still paying themselves."