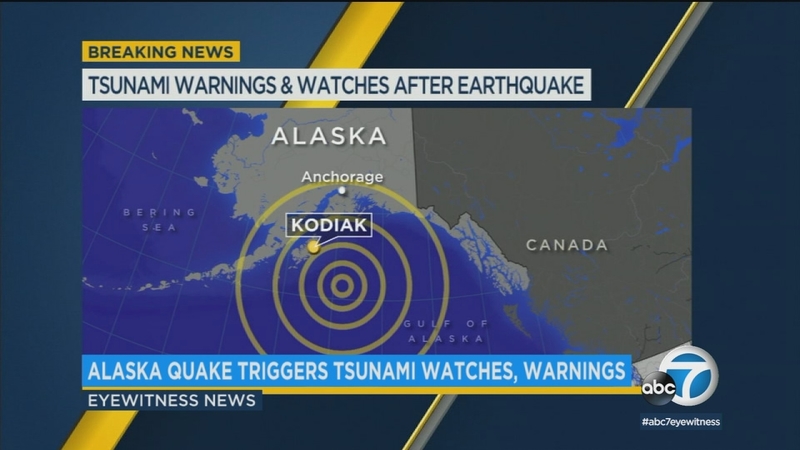 ANCHORAGE, Alaska (KABC) -- A 7.9-magnitude quake struck off the coast of Alaska Tuesday, triggering tsunami watches and warnings, including for California.

A large swath of Alaska's coast was placed under a tsunami warning, with some residents fleeing to higher ground.

Officials at the National Tsunami Center canceled the warning following a few tense hours after waves failed to show up in coastal Alaska communities.

VIDEO: Kodiak police tell residents, "This is not a drill' after quake
EMBED More News Videos

Video shows sirens going off and light fixtures shaking during an earthquake that prompted a tsunami warning in parts of Alaska and Canada. Update: The California coast no longer has a tsunami watch, and Alaska's warning is now an advisory.

The strong earthquake, which the USGS initially clocked at a magnitude of 8.2, hit at 12:30 a.m. and was recorded about 170 miles southeast of Kodiak Island in the Gulf of Alaska. Kodiak Island is located about 200 miles southwest of Anchorage, Alaska's largest city, which was not under a tsunami threat.

The quake prompted the tsunami warning for coastal Alaska and Canada's British Columbia, while the remainder of the U.S. West Coast was under a watch.

MORE: Here's what to do if there's a tsunami

An advisory remained in effect for a small part of the state. Part of the state's coastal area was under an evacuation order, but that has since been lifted.

Watches were canceled for Washington, Oregon, California and Hawaii. Officials in Japan also said there was no tsunami threat there.

Caltech seismologists said the quake originated in a "subduction zone" deep below the Pacific Ocean's surface as tectonic plates began to move on top of one another.

Heaton said that though the Alaska quake was interesting, its impact was relatively low. "It's not that big a deal," Heaton said.

Heaton attributed his assessment to the fact that the quake occurred inside a tectonic plate instead of between two plates.

"The really big earthquakes are between the plates," Heaton said. "They're one plate rubbing against another."

People reported on social media that the quake was felt hundreds of miles away in Anchorage. One fire chief said the shaking went on for about 90 seconds.