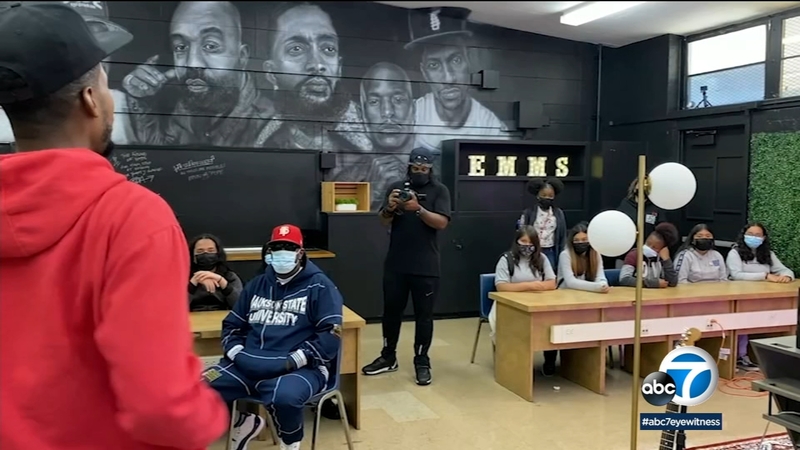 WATTS, Calif. (KABC) -- A state of the art music studio has been unveiled at Markham Middle School in Watts.

"This space has a recording facility... the whole concept around it revolves around making music. Inspire confidence within these kids to believe in themselves and focus on how amazing they are," said Lil Mussie.

Markham Middle School teamed with donors to create the music production studio, which was kept secret from students. Lil Mussie and other rappers chipped to make sure students have all the tools to turn their dreams into reality in the world of music.

"At the time we were just making the studio here in New Zealand and I just put up an idea what if we started a studio in L.A. and here we are today with a launch," said Lil Mussie.

Markham Middle School educators were overwhelmed with gratitude for the new music studio.

"As I share this space and look around the room I see inspiration and tremendous potential... inspiration form the Watts natives we see in these murals who happen to be in attendance today," said Principal Alex Kim.

Some of the legends reflecting on the rich musical history coming straight out of Watts.

"I am the father of one of the fathers of rap music. Watts is where the first rap record in the world was made called 'rapping black in a white world." That's the first record on earth called rap. From that you have hip hop and all of these things that have emanated from that," said Watts Prophet Hamilton.