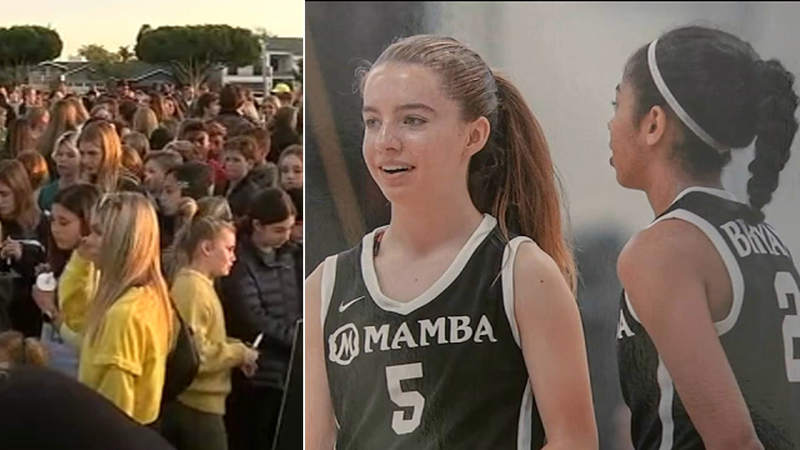 NEWPORT BEACH, Calif. (KABC) -- Friends and family gathered in Newport Beach to honor the memory of Alyssa Altobelli, a 14-year-old girl who died in the same helicopter crash that killed Kobe Bryant.

Alyssa and both her parents, Orange Coast College head baseball coach John Altobelli and his wife Keri, were among the nine killed in the horrific crash that also claimed the lives of Kobe and his daughter Gianna.

Hundreds of people showed up to a candlelight vigil to honor Alyssa's memory. They read poems she had written when younger, and praised her for her strong work ethic and contagious smile.

"If she was smiling, other people were always smiling around her," Ellie Robinson, a friend. "She was respectful. She knew how to handle herself. She knew what to say. She was nice, she was funny."

Vigil organizers say Alyssa grew up in the Newport Beach area, attended Mariner Elementary School and was in the 8th grade at Ensign Intermediate.

She was a point guard with the girl's Mamba basketball team.

Friends say sports played an important role in her life. They read a poem written by Alyssa in grade school as they shared their own memories of her.

They lit candles in the shape of the number 5 - Alyssa's number - and released lanterns with messages honoring her.