An attorney for Depp questioned Heard about her own drug use after the actress's testimony.
CNNWire
By Sonia Moghe, CNN 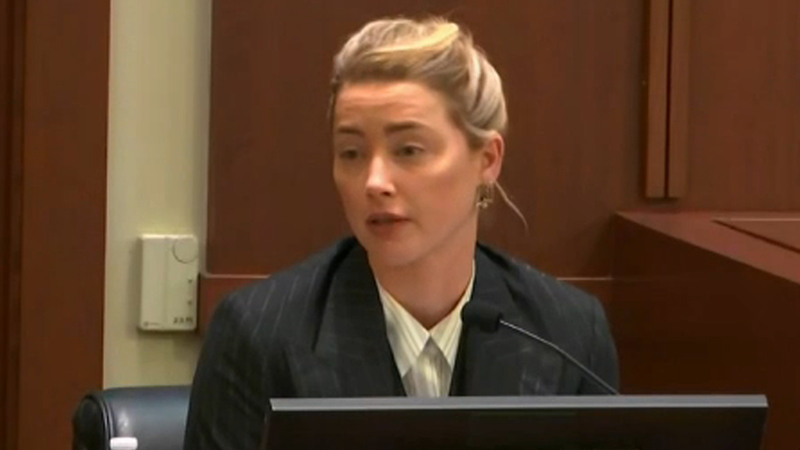 FALLS CHURCH, Va. -- Amber Heard faced questions from Johnny Depp's lawyers in her fourth day of testimony in the defamation trial between the former couple.

Depp has accused Heard of defaming him in a 2018 op-ed for the Washington Post. In the piece, which published roughly two years after they divorced, Heard described herself as a "public figure representing domestic abuse." Though Depp was not named in the article, he claims it cost him lucrative acting roles.

Heard has filed a counterclaim for $100 million.

Jurors in Johnny Depp's libel trial against his ex-wife Amber Heard were shown photos of her with red marks and swelling on her face after their final fight before their divorce.

After testifying that Depp's drug and alcohol use would turn him into a "monster" who would be violent with her, an attorney for Depp pointedly questioned Heard about her own drug use, including scheduling time for "drugs" at the couple's 2015 wedding.

"Who was the real monster in this relationship, Ms. Heard?" asked Depp's attorney Camille Vasquez on Tuesday.

"It's half of Johnny. It's not all of Johnny. The other half of him is wonderful and beautiful and the man I loved," Heard testified.

On the witness stand, Heard described her former relationship with Depp as both violent and romantic, stating his alleged violence toward her correlated with his drug and alcohol use.

"It was always the man who did drugs and beat me up. Yes, that's always been the monster," Heard testified.

Depp has previously testified that he has never "struck any woman" in his life.

Vasquez pointed to Heard's own drug use, introducing a typed schedule for Depp and Heard's wedding celebration on the actor's private island in the Bahamas, which included time for "dance party and drugs and music" after a rehearsal dinner.

"So, you planned to have drugs at your wedding to someone you characterize as a drug addict?" Vasquez said.

"To be fair, we were going to have separate parties," Heard said. "This is a draft clearly that was sent before there were a lot of changes made."

Messages between Heard and Depp

Vasquez also played recordings of Heard and Depp arguing, read excerpts of a "love journal" Heard filled with messages to Depp, and read texts between the former couple.

In one journal entry from April 2016, Heard wrote, "I am sorry I can get crazy. I am sorry I hurt you. None of this is meant to be an excuse for hurting you because the truth is nothing is. There is never a reason good enough to hurt you."

The graphic description of the sexual assault left Heard fighting for her composure as she described it to jurors.

Heard testified she was referring to the former couple's relationship.

"I very much wanted to leave the relationship I was in. But I didn't feel I had the power to leave," Heard testified. "I knew I was in a very toxic relationship with Johnny. And I knew I needed to change that."

Heard was asked about her arrest in 2009 related to an alleged domestic assault with a previous partner, for which she was ultimately not charged.

Heard denied that she assaulted the woman, her former partner, at the Seattle Tacoma Airport in 2009, an incident that was widely reported shortly after Heard received a restraining order against Depp in 2016.

"So Mr. Depp is not the only domestic partner you've assaulted is he, Ms. Heard?" asked Depp's attorney, Camille Vasquez.

"I've never assaulted Mr. Depp or anyone else that I've been romantically linked to. Ever," Heard replied.

Heard alleged stories about the arrest were planted by Depp's public relations team at the time, calling it a "smear campaign."

Perry Cooper, a spokesman for the Port of Seattle, confirmed to CNN that Heard was arrested at the Seattle Tacoma Airport on Sept. 14, 2009 on an assault in the 4th degree domestic violence charge, but that the prosecuting attorney's office declined to file charges against Heard in the case.

Cooper said a request to delete the record of Heard's arrest was granted. CNN also submitted a Freedom of Information Law request for the arrest, but was told by the Port of Seattle Police public records office that it had "no responsive documents for Amber Heard."

CNN has reached out to the person Heard was accused of assaulting. A spokesperson for Heard had no comment.

"The King County Prosecuting Attorney's Office did not receive a full report beyond the first appearance information, however from the initial information sent to us from police it did not appear that there was evidence to prove a misdemeanor domestic violence case beyond a reasonable doubt," Casey McNerthney, a spokesperson for the King County prosecuting attorney told CNN in a statement Tuesday. "This does not appear to be a question of the police work, rather not having the evidence to prove a case beyond a reasonable doubt."

Under re-direct examination, Heard's attorney Elaine Bredehoft asked Heard if the woman she allegedly assaulted had said the allegation was false.

Heard responded, "of course she did."

With those questions, Heard ended her time on the stand Tuesday afternoon.

The trial will resume testimony from additional witnesses on Wednesday.