The Thousand Oaks branch of America Supporting Americans, also known as ASA, has come a long way since it first launched in 2015.
KABC
By Rob McMillan 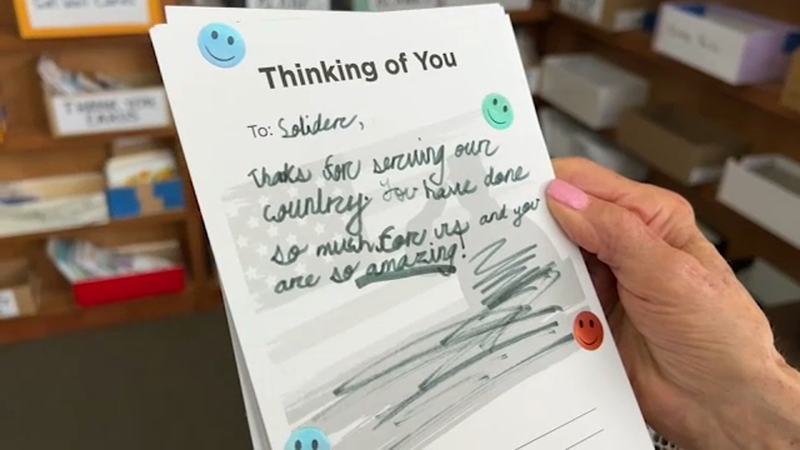 THOUSAND OAKS, Calif. (KABC) -- A care package can go a long way, especially for those currently serving our country.

What started out as a small group wanting to give back has since turned into a nonprofit that sends dozens of custom care packages to men and women serving overseas.

"My brother was serving with 141st airborne division during Vietnam, during the worst time in 1968, and morale was down low," said Linda Patterson, the founder of America Supporting Americans. "Obviously, many people will remember how Vietnam soldiers were treated when they came home."

Patterson said this branch of America Supporting Americans, also known as ASA, has come a long way since it first launched in 2015.

The group said during its first meeting, there were only five people involved who packed up four boxes. Now, ASA packs about 40 boxes a month.

"In these packages are toiletries, books, clothing and things they would like and need, but the most important part is we send several notes in each care package telling the servicemen how appreciated they are, and that they're certainly not forgotten," said Evie Greene with ASA.

Those notes are mostly from students at Southern California elementary schools. They're filled with encouraging messages, such as "You have done some much for us," and "You're amazing."

The display is just outside the ASA building and is open to visitors until Tuesday, June 21.

If you're interested in helping ASA, the nonprofit said now is the time.

"We're looking for the public's support," said Rick Henry with ASA. "A lot of people don't know who we are, and this is one of the reasons we're out here today, to let them know what ASA stands for, and to get involved."