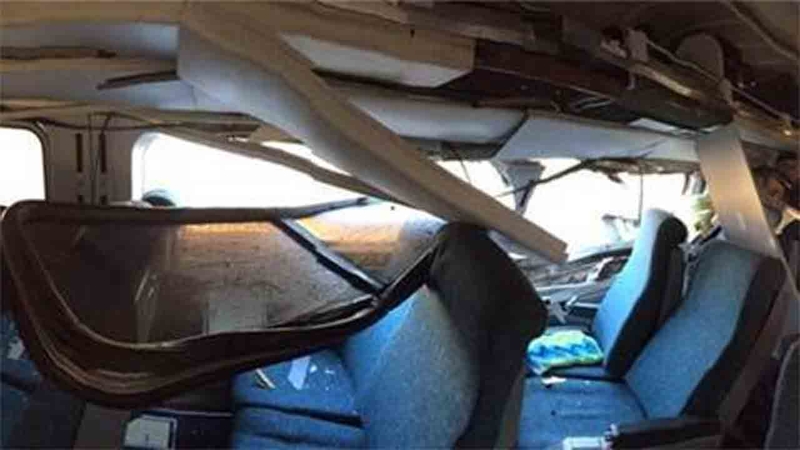 CHESTER, Pa. -- At least two people were confirmed dead and about 17 others injured after an Amtrak train struck a backhoe, derailing the lead engine in Pennsylvania Sunday morning.

The accident was reported at 7:53 a.m. Sunday near Booth Street on the Palmetto Train 89 in Chester. The train was operating from New York to Savannah, Georgia.

Amtrak suspended all service between Philadelphia and New York City until later in the afternoon when it ran a limited service.

All Amtrak service is suspended between New York City and Philadelphia at this time. Updates available at https://t.co/0oilXAZsFc.

Amtrak officials said the train struck a backhoe that was on the tracks and the impact derailed the lead engine of the train.

Officials with the Pennsylvania Emergency Management confirm there were two fatalities. Officials said they were not passengers, and Amtrak said they were workers in the vicinity of the backhoe.

U.S. Sen. Chuck Schumer, D-N.Y., told reporters in New York that he had spoken with Amtrak board chairman Anthony Coscia regarding. He said both workers killed were Amtrak employees.

Schumer said debris from the crash flew into the first two cars, injuring some passengers. According to Amtrak, approximately 31 people are hospitalized with non-life-threatening injuries.

Schumer said it's unclear whether the backhoe was performing regular maintenance or whether it was cleaning up debris from high overnight winds. He called for a complete investigation.

ABC7 sister station WPVI-TV spoke with witnesses and victims of the crash. Linton Holmes of Wilson, North Carolina was on the train when it derailed in Delaware County.


"The train was rumbling. We got off track, I guess. It was just a bunch of dust. There was dust everywhere. Then the train conductors, they were running to the front, because I was all the way in the back. Five more minutes, we were just waiting there. Then the train conductor came up and told us there was a fatality and wanted to see if anyone else was injured," Holmes said.

Holmes recalled an explosion of some kind.

"It was an explosion. We got off track and then there was like a big explosion. Then there was a fire and windows burst out. Some people were cut up, but it was just minor injuries," Holmes said.

Mariam Akhtar from Washington, D.C. was on the sixth car.


"It felt like the train hit something and there were like three or four really big bangs and it kind of threw us off the seats we were sitting in. There was a lot of smoke and everybody was yelling. The train kind of stopped and later on, everybody was running to the front. Then the people were in the front started walking toward the back," Akhtar said.

Akhtar added that the crew handled the situation well and none were panicked. She said she was on the train for about 30 minutes before she was able to exit.

WPVI-TV also spoke with a man on the phone whose 52-year-old mother was on the train. He says she was on her way from New York City to her home in Maryland.

His mother said she has injuries to her knees, head and back, but he was able to talk to her on the phone. She told him it was a scary and chaotic scene; she was stuck on the train for some time before being taken out in an ambulance.

WPVI-TV also obtained scanner audio from first responders who were called to the scene shortly after the crash.