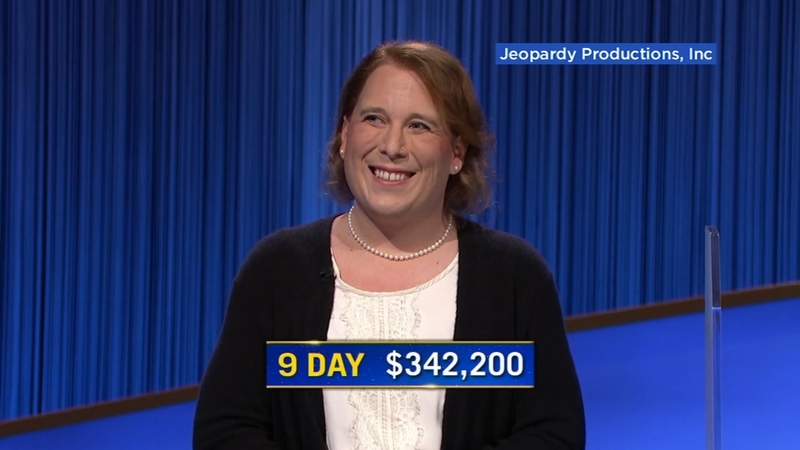 Schneider added $42,200 to her overall winnings on Friday -- her 28th episode -- bringing her running total to $1,019,001. She joins Ken Jennings, James Holzhauer and Matt Amodio as just the fourth person in "Jeopardy!" history to win more than $1 million in non-tournament play.

"It feels amazing. It feels strange," Schneider said. "It's not a sum of money I ever anticipated would be associated with my name."

Schneider, an engineering manager from Oakland, California, is the show's winningest woman. Last month she became the first trans woman to qualify for the show's Tournament of Champions, the annual competition featuring the players with the most wins from the past season.

Schneider wore a transgender flag pin during the Thanksgiving episode in solidarity with transgender people who may be ostracized from their families. Later, she wrote about her decision to wear the pin on Twitter.

So, obviously the thing I hinted at yesterday was the trans flag pin I wore in today's episode (not going to spoil anything else about the episode yet), so I wanted to explain a bit about why I chose to wear it.

"I didn't want to make too much about being trans, at least in the context of the show. I am a trans woman, and I'm proud of that fact, but I'm a lot of other things, too!" she wrote.

"The fact is, I don't actually think about being trans all that often, and so when appearing on national television, I wanted to represent that part of my identity accurately: as important, but also relatively minor," she continued. "But I also didn't want it to seem as if it was some kind of shameful secret. While it's gratifying to know that people didn't necessarily know I was trans until they read about it, I do want people to know that aspect of me. I think being trans is really cool!"

Schneider has been competing on the show since November 17.

Click here to find out when "Jeopardy!" airs in your city.