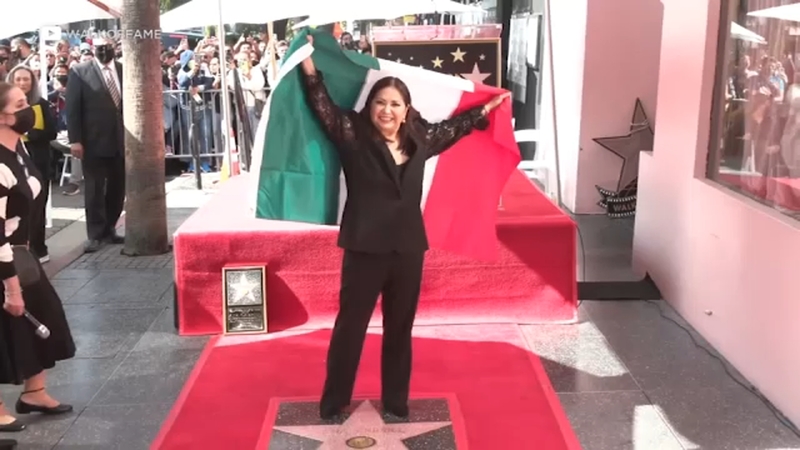 HOLLYWOOD, LOS ANGELES (CNS) -- A star on the Hollywood Walk of Fame was unveiled Thursday honoring versatile singing star Ana Gabriel for a career that has included seven singles and three albums reaching the top of the Billboard Latin pop charts.

"Many years ago, my parents and I were walking along this boulevard and we were fascinated looking (at) the names on the stars," Gabriel said during the midday ceremony. "I (felt) something in my chest, in my heart, and I said, 'Mom, one day, I don't know when, but one day my name will be here. One day I will have my own star.' Today, that dream has now come true."

"It is hard to put into words and express what the Hollywood star means to me," Gabriel told City News Service prior to the ceremony. "There is a great sense of achievement, gratefulness, and accomplishment after many years of work, sacrifice, discipline and a promise made to my parents many years ago. It is a happy feeling deep in my heart."

Gabriel's best-selling album is "Mi Mexico,'' a ranchera-influenced, mariachi-backed pop album released in 1991, which included a tribute to Mexico's most popular singer-songwriter, Juan Gabriel, and opened the doors to her career in Europe.

Oscar and Emmy-winning actress Regina King left her mark in Hollywood after she placed her handprints and footprints in cement outside of the TCL Chinese Theatre.

Gabriel is a 13-time winner at the Lo Nuestro Awards, which honor the best of Latin music, receiving its Excellence Award in 2006. Gabriel has received four Latin Grammy nominations and a Grammy nomination in 1990 for best Latin pop performance for "Quien como tu."

Gabriel said she considers the highlight of her career "not to get to the top but to stay atop for 46-plus years."

"I am fortunate to be an artist that has been able to move and evolve with the times,'' Gabriel told CNS. "It's taken discipline, hard work and being committed 100% to a record label like Sony Music, who has supported my career for a long time.