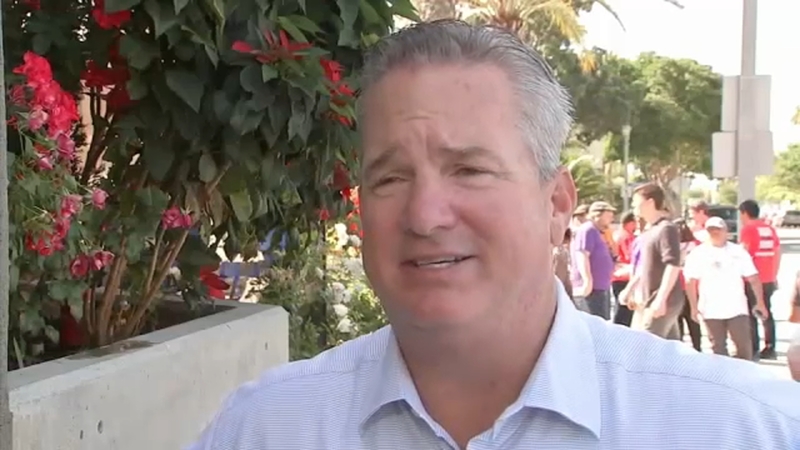 SANTA ANA, Calif. (CNS) -- The former president and CEO of the Anaheim Chamber of Commerce was expected to appear in Santa Ana federal court Tuesday after being charged with lying to a mortgage lender about his assets while seeking a loan for a $1.5 million home in the San Bernardino Mountains.

Todd Ament, 57, of Orange, was charged in a 99-page criminal complaint with making false statements to a financial institution while seeking funding in late 2020 to purchase a second home -- a five-bedroom residence in Big Bear City, according to the U.S. Attorney's Office.

The affidavit in support of the criminal complaint outlines a plot in which Ament -- with the assistance of a political consultant who was a partner at a national public relations firm -- devised a scheme to launder proceeds intended for the Chamber through the PR firm into Ament's bank account.

The infusion of cash -- which appears to have been a loan from the PR firm engineered by the political consultant -- allegedly influenced the lender's decision to fund the mortgage.

The scheme led to a series of wire transfers from the PR firm that ultimately gave Ament $205,000 and made it appear he had enough cash on hand to secure the home loan, according to the affidavit.

The city of Anaheim's planned sale of Angel Stadium to team owner Arte Moreno's company was halted for at least two months Tuesday by an Orange County Superior Court judge, who agreed to a request by the state to pause the deal amid a federal corruption probe of Mayor Harry Sidhu.

Ament allegedly used some of that money for the down payment, and some was used to make an out-of-escrow payment to the seller. The affidavit states that Ament made a $200,000 payment directly to the seller in an apparent effort to reduce the sale price of the house, thus reducing property taxes and lowering the commission to the seller's real estate agent, the affidavit states.

An investigation outlined in the affidavit revealed that Ament and the political consultant had a close relationship for several years, one that included leading a small group of Anaheim public officials, consultants and business leaders.

That group -- described by Ament and the political consultant as a "family" and a "cabal" -- met regularly at "retreats" to exert influence over government operations in Anaheim, according to the affidavit.

Ament and the consultant also allegedly devised a scheme to divert proceeds intended for the Chamber through the PR firm and into Ament's personal bank account. The affidavit alleges that Ament and the political consultant schemed to defraud a cannabis company that had retained the consultant to lobby for favorable cannabis-related legislation in Anaheim.

The cannabis company paid $225,000 to the Chamber with the understanding that it would have access to a task force that crafted such legislation, but at least $31,000 of that money was paid directly to Ament without those payments being disclosed to the client, the affidavit alleges.

The charge of making false statements to a financial institution carries a sentence up to 30 years in federal prison.