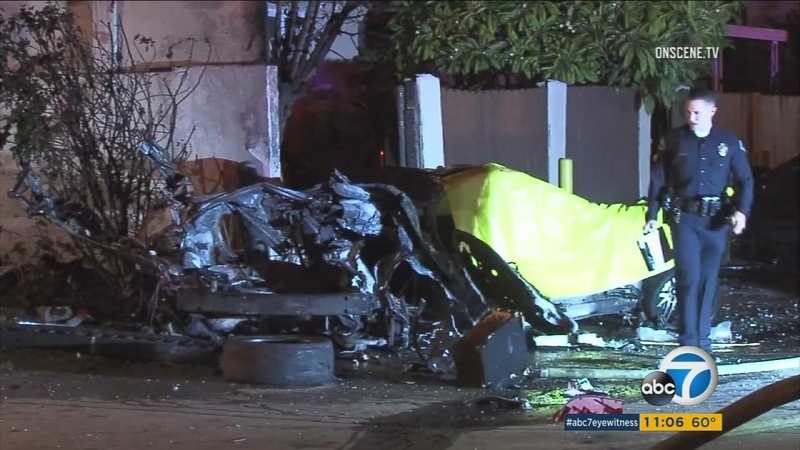 ANAHEIM, Calif. (KABC) -- Two people were killed and another was critically injured Saturday morning after a vehicle involved in a street race slammed into the patio of an apartment and erupted in flames, police said.

Officers and firefighters responded at about 2 a.m. to a report of a vehicle into a building and fire in the 1700 block of Ball Road, said Sgt. Daron Wyatt, spokesman for the Anaheim Police Department.

Emergency personnel arrived to find a vehicle spewing flames and smoke, and discovered two people inside after the blaze was extinguished, according to authorities. Burned beyond recognition, the 19-year-old driver and a passenger were not immediately identified. They were pronounced dead at the scene.

Martin Sanchez, who was near the crash site, ran to help a 24-year-old man who had been ejected from the vehicle and was suffering from severe burns. He was transported to a hospital and was expected to survive.

The fire did not reach the inside of the apartment, which sustained minor structural damage, police said. Three residents were displaced and received assistance from Red Cross workers at the location.

Investigators determined the burned-out vehicle, a 2003 Infiniti, had been involved in a street race with a second vehicle, described as a red Ford Mustang or Chevrolet Camaro, which fled the scene.

According to authorities, both autos were driving westbound at high speed on Ball Road when they crossed Euclid Street and one of the drivers lost control.

That motorist's vehicle jumped a curb, sheared a concrete light pole, struck several parked cars and the apartment building, and burst into flames, police said. The wreckage was mangled to the extent that investigators were initially unable to identify its make and model.

"I heard what sounded like an explosion, like an M-1000 had been lit," said Amanda Alvarez, who lives nearby. "I walked outside to see what was going on. I saw the car that had caught on fire."

She found her own car, "completely turned the opposite way," among the parked vehicles that had been struck in the collision.

Ball Road was temporarily closed in both directions between Euclid and Empire streets during the cleanup operation and investigation.

Anyone with information about the incident was asked to call Crime Stoppers at (855)-TIP-OCCS.