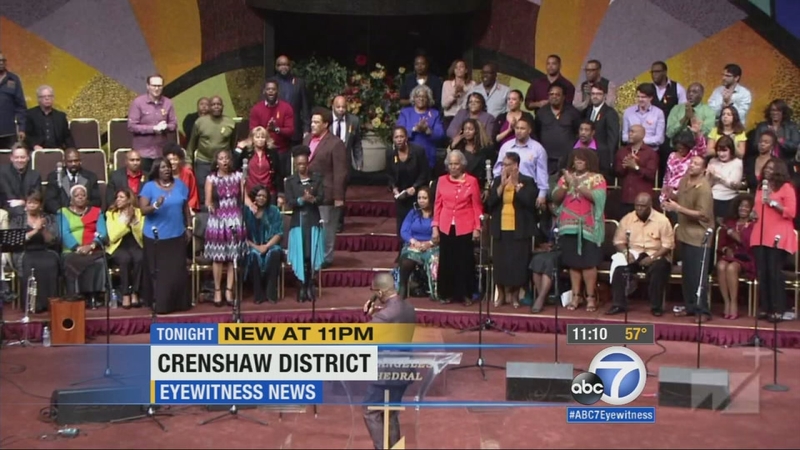 CRENSHAW DISTRICT, LOS ANGELES (KABC) -- Hundreds of people, including several celebrities, packed West Angeles Church of God In Christ Tuesday for an evening filled with music in celebration of the life of Andrae Crouch.

The seven-time Grammy award-winning gospel singer, songwriter and choir director died at Northridge Hospital Medical Center on Jan. 7 at the age of 72.

Music legend Andrae Crouch, who won seven Grammy Awards and was inducted into the Gospel Music Hall of Fame, died Thursday, Jan. 8, 2015. He was 72.

Reverend Jesse Jackson attended the ceremony. He says Crouch was the father of modern gospel music.

Crouch worked with numerous artists during a career that spanned more than 50 years.

He helped Michael Jackson arrange the hit single "Man In The Mirror," and his choir sang backgrounds for Madonna's "Like A Prayer."

He also arranged music for two acclaimed films, "The Color Purple" and Disney's "The Lion King."

"Andrae was that bridge. He brought old and new, cutting edge and traditional, together," Marvin said.

"He broke that wall of segregation, you know, where black gospel wasn't being played or being accepted," Bebe said. "He wrote songs that broke that door and so we owe so much to him."

Crouch was also given a star on the Hollywood Walk of Fame.