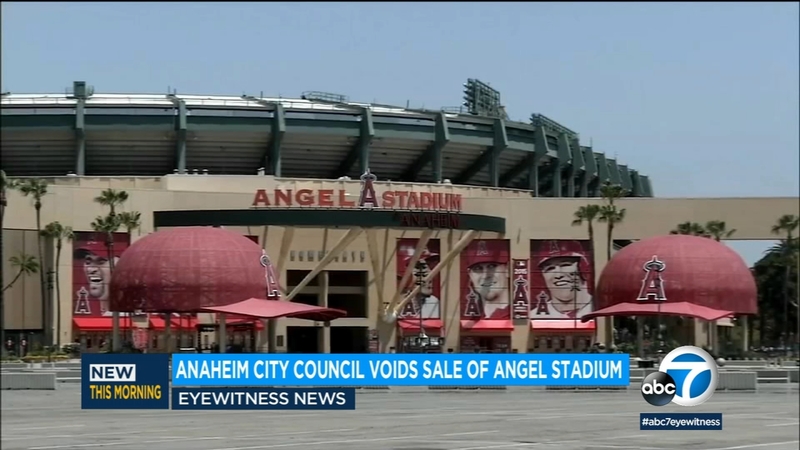 ANAHEIM, Calif. (CNS) -- The Anaheim City Council has voted unanimously to void the 2020 agreement to sell Angel Stadium and surrounding property to Arte Moreno, the owner of the Los Angeles Angels, and SRB Management LLC, starting a legal process that introduces conflict of interest concerns.

The decision during the City Council meeting on Tuesday night came a day after Harry Sidhu resigned as mayor of Anaheim amid an FBI investigation alleging he fed insider information to the Los Angeles Angels in the proposed sale of Angel Stadium in the hopes of a substantial campaign donation, as well as cheating on sales taxes for a helicopter he bought. The City Council received notice May 16 of a federal investigation into Sidhu's involvement in the sale of Angel Stadium and the site proposal.

The City Council asked the city attorney to inform the Angels of the decision today, according to a report in the Los Angeles Times.

Councilman Stephen Faessel told the Times the termination of the deal, "is going to be litigated for the next several years'' and said he did not anticipate a window to reopen negotiations with the Angels before then.

The agreement to sell the Angel Stadium included commercial and residential plans to develop the land around the stadium.

Anaheim Mayor Harry Sidhu has resigned amid an FBI's corruption probe related to the sale of Angel Stadium.

"The stadium proposal was evaluated and approved on its merits," Mayor Pro Tem Trevor O'Neil, who is handling the duties of mayor per Anaheim's city charter, said in a statement released by the City Council on Tuesday. "However knowing that there may have been an element of corruption that brought the final product to us, we cannot move forward in good conscience."

The stadium site sale was immediately voided because of the City Council's actions and SRB Management LLC, made up of Moreno and his family, was notified of the sale void.

Moreno could sue the city for breach of contract, the Times reported.

The City Council's next step is to start a legal process that will involve filing a motion for declaratory judgment in Orange County Superior Court based on concerns of conflict of interest and that the transaction was "not at arm's length, according to a statement from the City Council.

Additionally, the City Council ends prior negotiations involving the sale of the stadium site that started in 2019 and resulted in agreements approved in September and October 2020.

Anaheim Mayor Harry Sidhu hasn't been charged with a crime but is accused of soliciting $1 million in campaign contributions from an Angels representative in exchange for performing official acts that would finalize the stadium sale.

The city-owned stadium and 151 acres of land was set to sell for $320 million, paid partly in cash and partly in affordable housing and a park built on the stadium site.

The deal was subject to updated sale and development agreements, and reflected a now-paused settlement with California related to the Surplus Land Act, that were supposed to go before the City Council in June, the final step before the close of the stadium site sale.

The City Council will no longer take action to sell the stadium and develop the surrounding land, as previously approved.

The Angels have a lease to play at Angel Stadium through 2029 with the option for three three-year extensions through 2038.