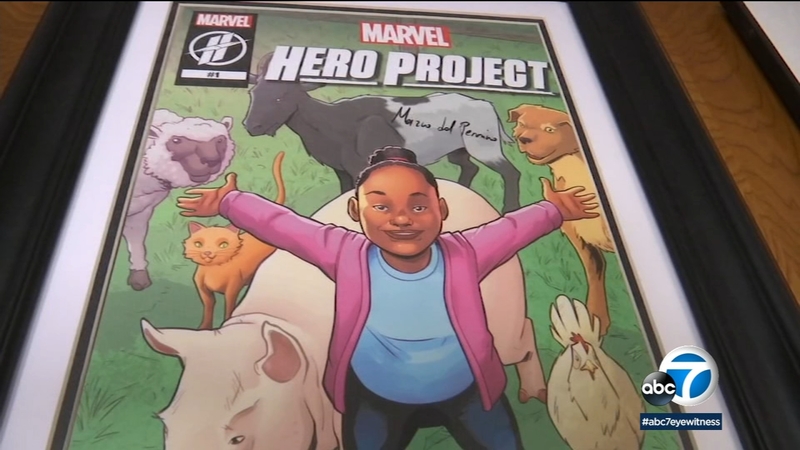 LONG BEACH, Calif. (KABC) -- A 13-year-old animal rights advocate in Long Beach will soon be a hero in the Disney+ series "Marvel Hero Project" thanks to her activism.

Genesis Butler has been a real-life hero to many four-legged creatures in her local community for a while.

The 13-year-old girl is an animal rights advocate who continues to make strides in addressing the protection of animals.

"Animals are like the same as us. They have feelings. They have emotions and they feel sadness," Butler said.

Soon, her advocacy work will be featured on a Disney+ original series where Genesis turns Marvel hero.

"I didn't think I'd be on Marvel ever, but I think this is really cool that I'm able to be a part of this," Butler said.

She spends a lot of her free time volunteering, speaking at public events and fundraising for her nonprofit Genesis for Animals to donate to animal sanctuaries.

Her journey began back when Butler was just three years old. That's when the toddler discovered, in order to have chicken nuggets, chickens have to die. Butler and her family went vegetarian.

A year later, while mom nursed her little sister, Butler asked about the milk the rest of her family drank.

"She told me how we had to get it from mom cows. I didn't want to drink it ever again so my whole family ended up going vegan," Butler said.

Butler took her message all the way to the Vatican last year where she tried to ask the Pope to go vegan for Lent.

"We got a lot of other people to go vegan for lent and it brings a lot of awareness about veganism," Butler said.

Butler's work then caught the attention of folks with Marvel's Hero Project.

The show features young, real-life heroes who make a difference in their communities.

Genesis and her family got a big surprise: a jacket complete with a Marvel patch and a comic featuring Butler inspired by the young activist's work.

"My dad was actually put in it and my dog," Butler said.