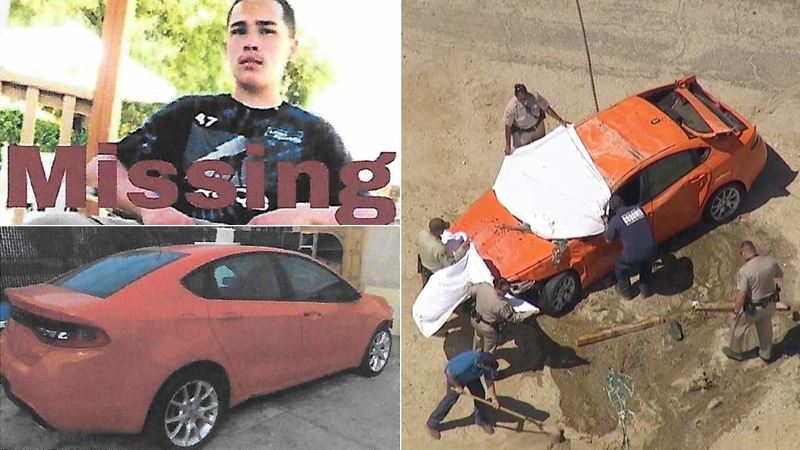 LITTLEROCK, Calif. (KABC) -- Authorities found a body in a car submerged in the California Aqueduct in the Littlerock area Friday that may be linked to an 18-year-old who was reported missing several days ago.

Los Angeles County firefighters were called to the area of 106th Street E. and Pearblossom Highway shortly before 10 a.m. following a report of a traffic accident. A car was reported to be in the water at the aqueduct.

However, sheriff's officials canceled the emergency response after they determined the car had been in the aqueduct since Sunday.

The vehicle, an orange car, was pulled out of the water, and a body was found inside. The body has not yet been identified, but authorities said it matches the description of the teenager.

The missing teen, Gustavo Santana, is from Littlerock. A missing person's poster described Santana's vehicle as a 2013 orange Dodge Dart.

According to the poster, Santana was last seen on Sunday around 5 p.m. leaving his house to head to work at McDonald's.

He apparently called his workplace to let his co-workers know he was running late, but he never made it.

The teen's aunt, Bertha, said they never heard anything from him after he had called his job.

A Department of Water Resources worker had noticed a damaged fence near the water and checked the area to see if anything was wrong. The worker then found the car.

Authorities said there is not a lot of evidence that could suggest another car in the area, there were also no witnesses.