STUDY: Gas stoves emit greenhouse gases, even when not in use

A Stanford study found emissions from gas stoves in U.S. homes are comparable to annual emissions from half a million cars.
KABC
By Sophie Flay and Grace Manthey 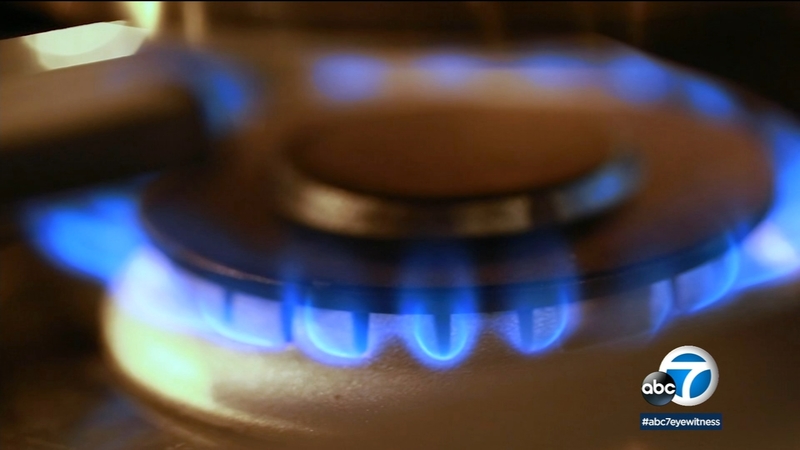 STUDY: Gas stoves emit greenhouse gases, even when not in use

LOS ANGELES (KABC) -- Whether your gas stove is on or off, it's likely contributing to climate change.

A recent study out of Stanford shows that annual methane emissions from all gas stoves in U.S. homes have a climate impact comparable to the annual carbon dioxide emissions from 500,000 cars.

About three-quarters of the emissions happen when the stove is off.

Eric Lebel, one of the authors of the study, said methane is 86 times stronger of a greenhouse gas compared to carbon dioxide over a 20-year time period.

"So that's why we're concerned about these really small amounts of methane leakage because it has that really drastic short term climate impact," Lebel said.

The authors measured the emissions by enclosing the area around the stoves in plastic, but weren't able to find out why the majority of the emissions occur while the stoves aren't in use because all the stoves they measured were in people's homes. To figure out where the emissions were coming from, they would have had to take apart the stoves.

But, Lebel said they have their theories.

"It could be coming from somewhere inside the stove, for instance, while the gas is on but the stove is off, there could be something leaking in there. But it's up for future research to figure out exactly what's causing that," he said.

While there are no current U.S.-based indoor exposure guidelines for nitrogen dioxide, some households that don't use range hoods or have poor ventilation could surpass the national outdoor standard of nitrogen dioxide exposure.

Rima Habre, an associate professor of environmental health and spatial sciences at USC who was not involved with the study, said it's important to be careful when comparing indoor pollution concentrations to outdoor standards.

"Because the outdoor standards are meant to be population level health risks, then they don't necessarily directly translate to you as one person as an individual in your home," Habre said.

But regardless of whether or not they exceed certain standards, Habre said high levels of nitrogen dioxide in homes are concerning.

"The reason it's more of an exposure issue is that we, as people, can spend a lot of time indoors at our homes, right? And especially if you have kids in the home, or if a woman is pregnant and has a baby, If the woman is cooking she's very close to this stuff when she's cooking so from an exposure point of view it definitely contributes to personal exposure," Habre said.

"There is a lot of research and science linking high concentrations of NO2 in the home to these worst respiratory outcomes," she continued.

According to the California Air Resources Board, about 7% of greenhouse gas emissions come from residential buildings.

Nationwide, more than 40 million households, about 35%, cook with gas stoves, according to data from the U.S. Census Bureau's American Housing Survey. 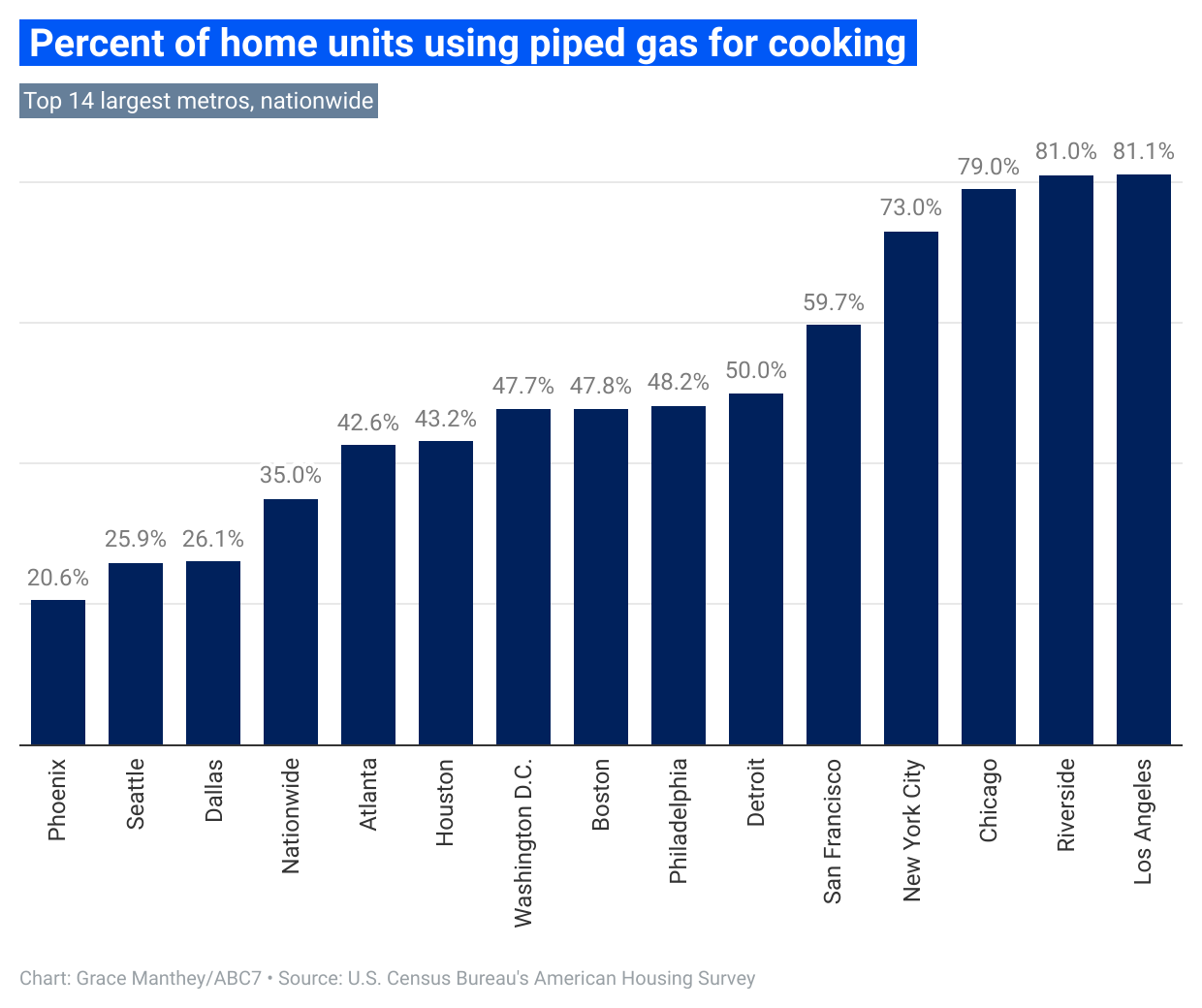 Among large metro areas, Los Angeles and Riverside have much higher percentages of households that have gas stoves - about 81%, followed closely by Chicago at 79% and New York City at 73%. 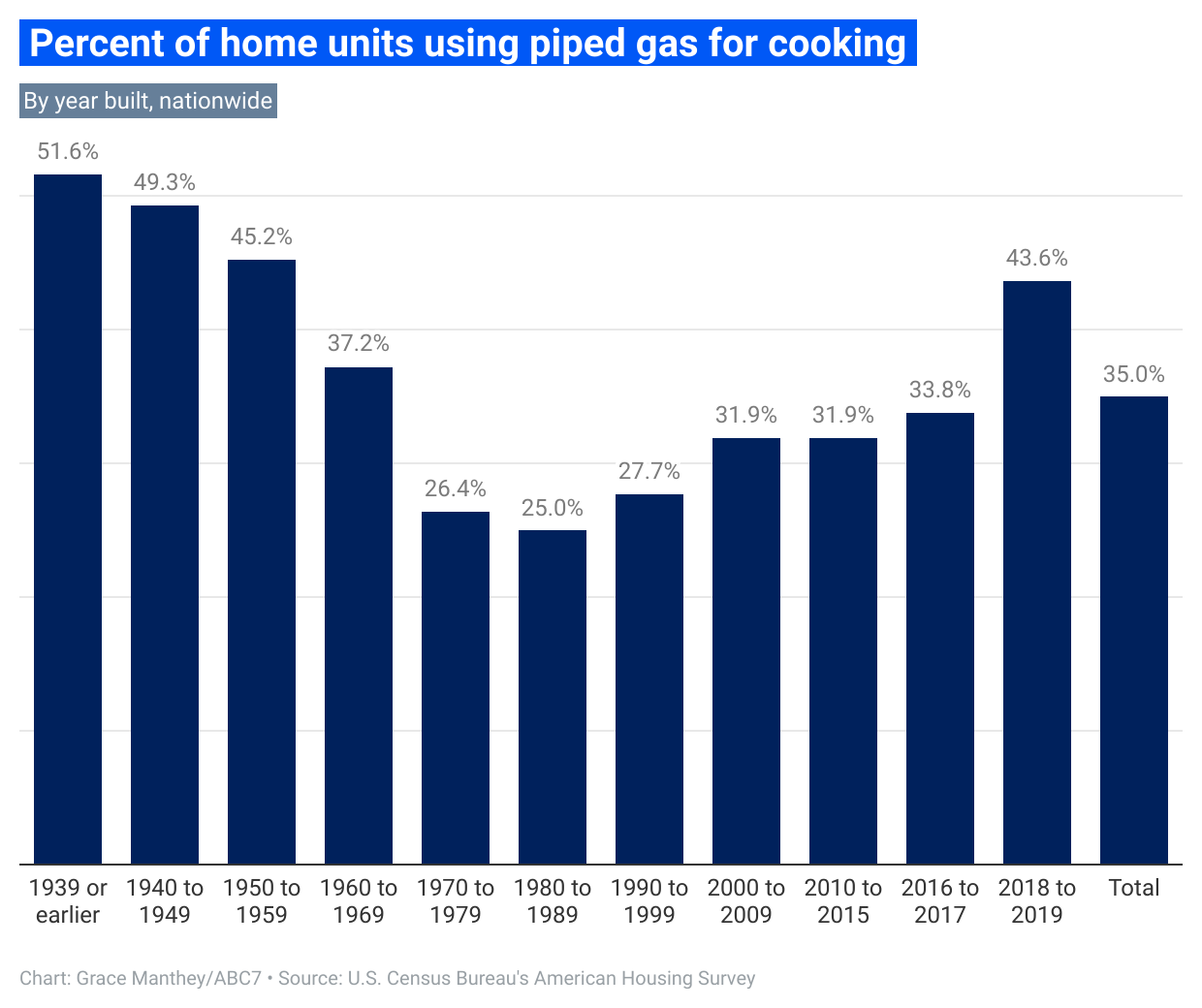 "Gas cooking has been seen as kind of an upscale way to cook, and so there's a kind of a cultural context there in terms of how people think they like to cook," said Andrew McAllister, a commissioner at the California Energy Commission.

The Energy Commission's 2022 Energy Code, which takes effect on Jan. 1, 2023, requires new homes to be "electric-ready" so electric appliances can eventually replace gas ones.

The reason the code requires homes to be just "electric-ready" and not fully electric, is because the Energy Commission wants to give consumers and builders time to learn about and get used to the new technologies available.

McAllister said the Commission is funding some energy education centers and finding that appliances like electric, induction cooktops are "getting a lot of traction."

"That's good news, right? The builders are going to see that, they want to build the buildings that people want right. They're responding to consumer demand. And so, if consumers want induction cooktops, that's what they're going to put in," McAllister said.

Across California, more than 50 cities have implemented policies to phase out gas in buildings, according to information collected by the Sierra Club, an environmental nonprofit group.

Councilmember Nithya Raman recently introduced a motion to the city council that would require all new residential and commercial buildings in Los Angeles to be zero-emission.

"We, in the city of L.A., are moving to a much cleaner energy grid. It's going to be essentially set to be carbon free by 2035, if not even sooner. And for us, this proposal really meant that new construction took advantage of this new clean grid, rather than relying on gas connections, which can be polluting both for indoor air quality and overall for our environment," said Raman.

But what about existing buildings?

"We have more than 10 million residential consumers and many of those are low income," said McAllister. "That's a lot of buildings, most of which have gas service."

"We're really going to have to show how these projects can work and be viable for the consumer and actually provide strong benefits to the customer," McAllister said.

In the meantime, ventilation is key

The best thing to do, both Habre and study author Eric Lebel said, is ventilate anytime you're cooking. If you don't have a range hood with a fan, open a window.

"If you are venting your property, if you are opening your windows when you're cooking, etc., you can really minimize exposure to a place where, you know, you minimize your own personal risk a lot," Habre said.