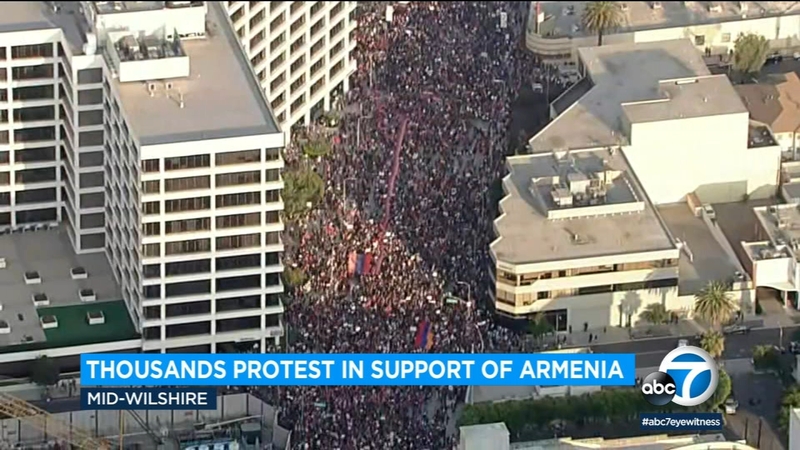 BEVERLY HILLS, Calif. (KABC) -- Thousands of pro-Armenian demonstrators marched from the Fairfax District to Beverly Hills on Sunday afternoon as a cease-fire between Armenia and Azerbaijan appeared fragile.

Members of the Armenian community rallied outside the Turkish consulate on Wilshire Boulevard in Beverly Hills. The demonstration, named "Artsakh Under Attack: March for Victory," was scheduled to begin at 3 p.m. at Pan Pacific Park and made its way to the consulate.

The demonstrations appeared to be largely peaceful. The massive crowd was estimated to be about nearly 20,000.

Beverly Hills police said road closures were possible in the area between 1 p.m. and 7 p.m.

Armenia and Azerbaijan accused each other of violating the terms of the agreement brokered by Russia amid the conflict over the disputed Nagorno-Karabakh region.

Los Angeles County is home to the nation's largest population of Armenian immigrants, and multiple demonstrations have taken place over the past week against what many of them described as Azerbaijan's aggression against Armenia and Nagorno-Karaabakh, also known as Artsakh.

The mountainous region is controlled by ethnic Armenians but is inside Azerbaijani territory.

Armenia and Azerbaijan have been engaged in conflicts for years, but the situation escalated in July when Azerbaijan threatened to blow up a nuclear power plant in Armenia.

The Armenian-American community is planning a large march in Los Angeles on Sunday to draw attention to their homeland's conflict with Azerbaijan.

Azerbaijan on Sunday accused Armenia of attacking its cities and villages in violation of the cease-fire deal that seeks to end the worst outbreak of hostilities.

Nagorno-Karabakh's military officials denied attacking Ganja and said the territory's army is observing the cease-fire. They added that during the night Azerbaijani forces shelled Stepanakert, the region's capital, and other towns in violation of the truce.