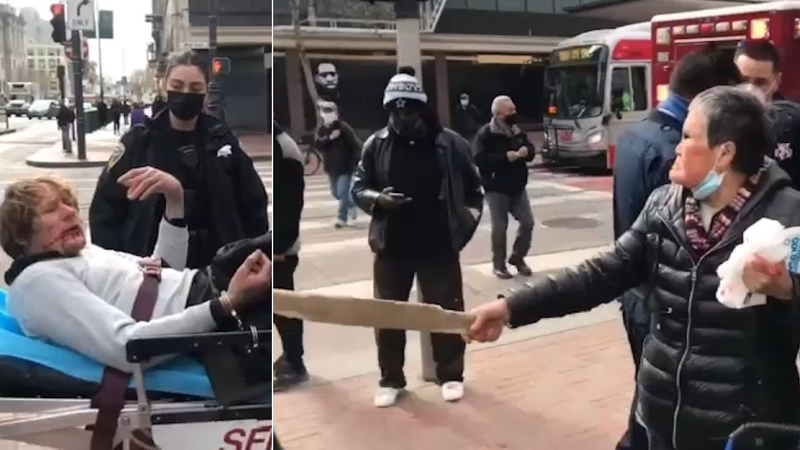 Police arrest suspect in assault on Asian-American woman, 75, who fought back

SAN FRANCISCO (KABC) -- A man has been arrested after allegedly attacking two elderly people in San Francisco, including a 75-year-old Asian-American woman who fought back, authorities said Thursday.

Jenkins is accused of attacking an 83-year-old Asian man on Wednesday morning in the Tenderloin District before being chased by a security guard on foot.

"As Jenkins was fleeing, he assaulted the female victim," police said in a news release. "The security guard was able to detain Jenkins until officers arrived."

Both assaults are believed to have been unprovoked, investigators said, adding that they are working to determine if racial bias was a motive.

The hashtag Stop Asian Hate trended on Twitter after a shooting in Atlanta left eight, including many Asian women, dead. Here's what you can do to help stop the spread of hatred and violence.

News video from the scene showed Jenkins bleeding and handcuffed to a stretcher before he was placed in an ambulance and transported to a hospital.

The female victim was holding an ice pack to her head and a wooden stick or paddle in her hand.

She told San Francisco station KPIX she had been leaning against a utility pole when the assailant punched her without provocation.

KPIX reported that the woman repeatedly said in Chinese, "You bum, why did you hit me?" and then turned to the crowd and said, "This bum, he hit me."