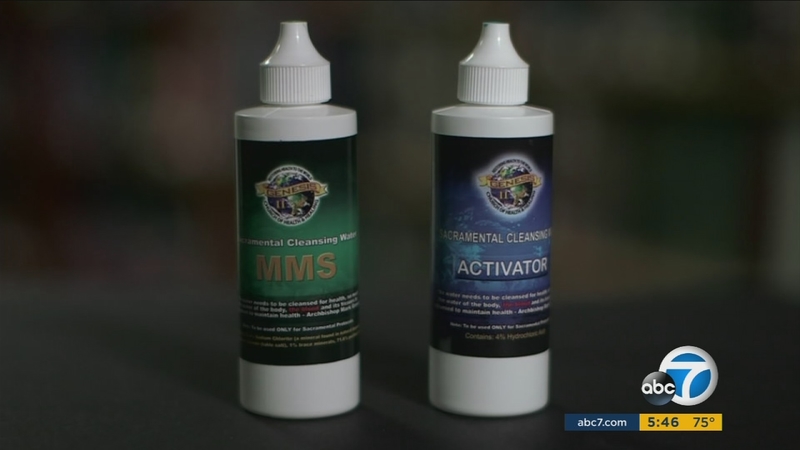 LOS ANGELES (KABC) -- Eyewitness News teamed up with ABC News to conduct a year-long investigation into a supposed "miracle cure" that's peddled by the so-called "Church of Bleach," which has a chapter in Southern California.

The "miracle cure" is really a form of industrial bleach, but that doesn't stop believers from pushing the potion on the sick, the desperate, and perhaps most alarmingly, the parents of children with autism.

Kerri Rivera has made her name on the extreme fringes of the autism community. According to Rivera, when the full moon rises every 29 days, that's when parasites wreak havoc inside the guts of children with autism.

"Autism is curable," Rivera is heard saying in a video. "I like to convince people they can cure their kids."

Rivera tells desperate parents that parasites and other pathogens are to blame.

Rivera claims chlorine dioxide, also known as MMS, can heal the symptoms of autism by killing parasites with a protocol that's timed to the lunar calendar.

Critics call it pseudo-science at its worst.

"I believe the missing piece of the puzzle to autism recovery is chlorine dioxide," Rivera stated in a recorded video.

Medical experts said the "miracle cure" is nothing more than a type of industrial bleach.

Complaints by some people to the FDA report life-threatening reactions. One person wrote MMS, "killed my mom."

Still, supporters, including Rivera, insist that when used as directed, MMS is safe and provides unique benefits.

Rivera instructs parents to give their children increasing doses of chlorine dioxide orally and by enema. Sometimes multiple enemas a day.

Dr. Paul Wang, a pediatrician and the senior vice president of Autism Speaks, a nationally recognized advocacy and support group, said parasites do not cause autism.

"No, parasites do not cause autism," Wang said. "She says that MMS is not a bleach, but it is."

"And frankly, it's a poison. It should not be given to anybody with autism or cancer or diabetes or any other condition that they claim it can treat," he continued.

Despite the warnings, there continues to be a thriving, mostly underground community of parents sharing their stories, including photos and video of supposed post-enema parasites.

A private Facebook group, "CD Autism," has more than 7,000 members, including mothers in Southern California.

"I started giving my son daily enemas four weeks ago," one mother from Duarte wrote. "Here's a tip: use lots of oil."

"Can I try double dosing when he gets hyper?" a mother from Cerritos asked.

For one hour of consultation over Skype, Rivera charges parents about $100.

Eyewitness News asked Julie Wedeen, a Sherman Oaks mother who is on the board of directors for the non-profit Autism Movement Therapy, to consult with Rivera about her son Tyler.

"Will it cure autism?" Wedeen asked.

"I guess I'm just scared of the side effects? But if there aren't any?" Wedeen said.

"There are no side effects. It doesn't have any. Within an hour it's out of the body," Rivera responded.

Rivera insisted the potion was safe because it's chemically different from bleach. She also claimed it's most effective when doses are timed to cycles of the moon.

"And so you can get a lot of kills. You can kill a lot of parasites during the moon cycles," Rivera stated.

NOTE: To be clear, Wedeen will not be giving her son chlorine dioxide or MMS.