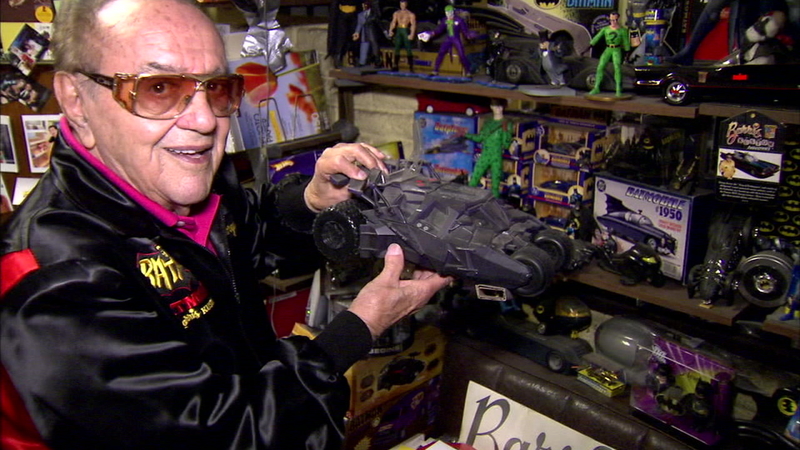 NORTH HOLLYWOOD, LOS ANGELES (KABC) -- The original TV Batmobile from the 1960s quickly became one of the most famous cars in the world.

A small commercial building in North Hollywood was essentially the behind-the-scenes Batcave in a way. It was the decades-long workspace of the late car customizer George Barris.

"This is where the Batmobile was born, where it was created and designed," said Joji Barris-Paster, Barris' daughter.

Barris never shied from the spotlight when it shone, like in 2012 when he was promoting the auction of Batmobile #1. He was lively and animated for our ABC7 camera the day we visited Barris Kustom Industries to preview the auction. The car sold a few months later for over $4,000,000 to a private collector

Barris also never stopped collecting, right up until his passing three years ago. Now, the time has come to clean out the garage, a rather monumental task for his family.

"Dad's not here to ask 'What did you do with this or why?' but it all came together, the stories came together. And it's all great memories," noted Barris-Paster.

If there was a toy, a poster or a magazine having to do with a movie or a TV show, Barris collected it. The "King of Kustomizers," as he called himself, was also the king of keeping stuff.

The sale is made up of both automotive items and memorabilia from the movie, TV and recording industries. Because of that variety, an eclectic group of treasure hunters started showing up long before the sale began

James Golden of Bakersfield plopped his chair on the sidewalk in front of the building at 8 p.m. Thursday, assuring himself first place in line.

The facility itself is an icon of Riverside Drive and the real working side of Hollywood. The family assures everyone it's not going anywhere.