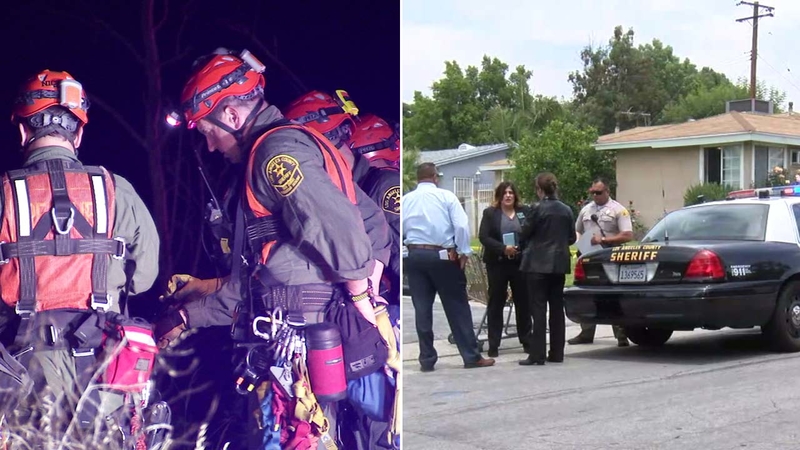 AZUSA, Calif. (KABC) -- Four men have been charged with the killing of a man whose body was found on Highway 39 in the San Gabriel Mountains.

Los Angeles County Sheriff's Department homicide detectives identified the victim as 20-year-old Julian Hamori-Andrade, of Glendora. A tip led authorities to the highway in the Azusa Canyon area, where the victim was found approximately 30 feet down the hill from the roadway in heavy brush on Wednesday.

With the heavy brush, it took two hours to find the man. He died of what investigators described as blunt force trauma.

Balaskas, Elmendorf, and Amigon were arrested and booked into the San Dimas Sheriff's Station. The charging document alleges that Balaskas personally used a deadly and dangerous weapon, a metal chair, during the murder, robbery and kidnapping of Hamori-Andrade.

A fourth suspect charged remains out of custody. He's identified as Matthew Capiendo Luzon, a 21-year-old resident of the Azusa home on Goodway Driver where a large amount of blood was discovered on Monday.
The complaint by the District Attorney's Office alleges Luzon personally used a rock and broken glass pipe in the crime.

Investigators learned the victim, along with Balaskas, Elmendorf and Amigon, were at the home of Luzon on Goodway Drive on Monday when the victim was brutally beaten before being dragged to a pick-up truck belonging to one of the suspects, a sheriff's department press release stated. The unconscious victim was lifted into the bed of the truck and driven to Azusa Canyon. He was then beaten again before being thrown over the side of a road.

Detectives said they believe Hamori-Andrade was alive upon arriving at the roadside location and later died from his injuries.

The investigation was launched after deputies responded to a disturbance call at the Azusa home on the corner of Goodway Drive and Duell Street around 10 p.m. Monday. While there, they discovered a trail of blood originating from a room inside the residence. The trail led out of the home and onto the sidewalk before disappearing. A search was then launched for a missing tenant who lived in the house.

Officials said they credit tips from passersby who witnessed the suspect vehicle on the night of the incident. They said the tips led to the discovery of the area where the victim had been left to die.

If you have any relevant information about this ongoing investigation, you're urged to contact the Los Angeles County Sheriff's Department's San Dimas Station at (909) 450-2700.