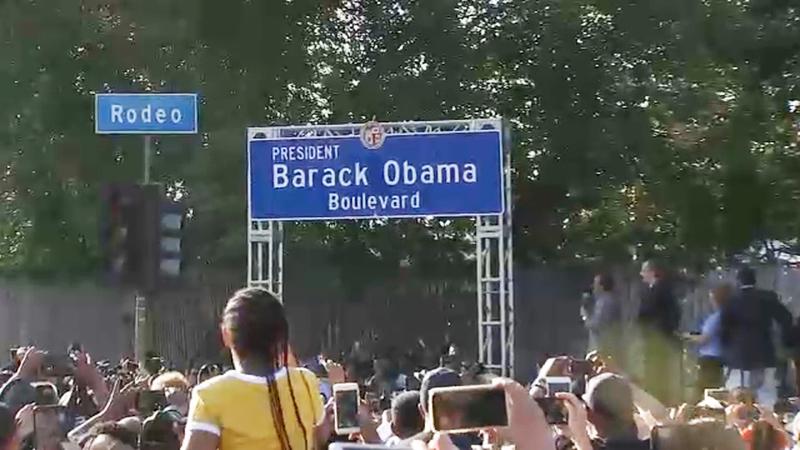 LOS ANGELES (KABC) -- The city of Los Angeles on Saturday renamed a section of a road as Obama Boulevard in honor of the 44th president of the United States.

The name unveiling happened at 5 p.m. during a ceremony and day-long festival to celebrate the historic occasion.

Obama Boulevard has replaced 3 1/2 miles of what was Rodeo Road between Mid-City and Culver City. The stretch of road intersects with Martin Luther King Jr. Boulevard and further establishes a "presidential row" that includes Washington, Adams and Jefferson boulevards.

"I get to live in a lifetime where we elected our first black president," said South L.A. Rev. Russell Thornhill. "I get to share that with my mother, who's 92 years old who voted and actually went to the inauguration. I called her before I came here to let her know what I was doing, and she was just in tears because she was seeing in her lifetime... the naming of a street of the first black president in this community."

"With this change, we are publicly documenting what Obama's legacy as our nation's first black President means to our city and our South Los Angeles community," City Council President Herb Wesson said in a statement. "For every child who will drive down this street and see the President's name, this will serve as a physical reminder that no goal is out of reach and that no dream is too big."