A couple of Iraq War veterans have opened a restaurant in Downey that honors the sacrifices of former service members.
KABC
By Carlos Granda 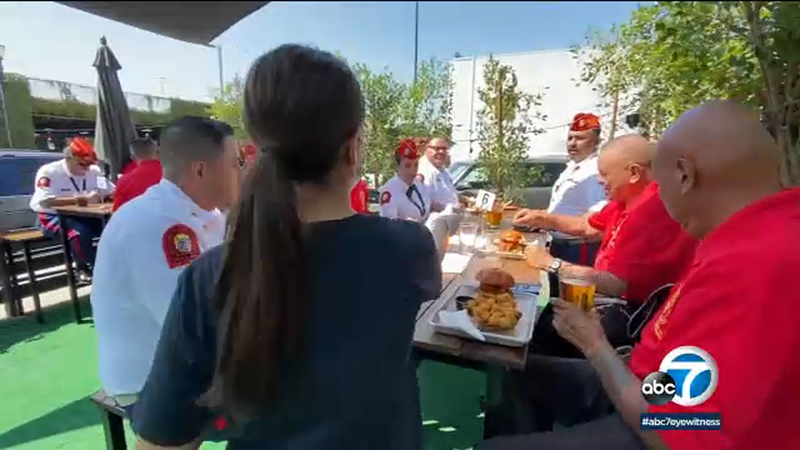 DOWNEY, Calif. (KABC) -- A couple of entrepreneurial Iraq War veterans in Southern California are doing their part to honor and look after fellow former service members.

They're doing that with their own restaurant in Downey.

"Bastards is what your modern-day VFW, American Legion would be," said Velez. "The name is a name of pride. We wear 'Bastards' in battle and we also wear it here."

"We're all infantry riflemen with the Magnificent Bastards. I come from a Mexican American background. My parents come from Mexico. They came here at a very young age. And, I joined the Marine Corps when I was 18 to do my part and to give back to this country that we really are grateful for," said Velez. "Being a Hispanic and joining the most elite military branch, you feel some type of pride that can't be taken away from you."

Heroic actions are remembered through photos, medals and names at the restaurant.

"Gold Star families can come and really hang the remembrance of their lost ones and also allow us to share their memory," said co-owner Manny Maeda.

"We like to introduce the vets to the community, to show them that we don't only like to take care of our country offshore and out in foreign countries, but we like to do it here," said Velez.
Report a correction or typo
Related topics:
businessdowneylos angeles countylatinofoodveteransmilitarymexicanrestaurantsabc7 salutes
Copyright © 2022 KABC Television, LLC. All rights reserved.
TOP STORIES
Blink-182's Travis Barker reportedly hospitalized in LA
2 found dead next to car outside Chatsworth school
California gun owners' personal information exposed in data breach
Source of mysterious lights over San Diego identified
1 dead after shooting near Baldwin Hills Crenshaw Plaza
SoCal woman opens home to women from other states seeking abortion
Woman dies after being shot on 710 Freeway in Long Beach
Show More
R. Kelly due in court for sex abuse sentencing in NYC
Here's how some schools are trying to close gender gaps in sports
West Hollywood's bars could see later last call
Man allegedly used homemade flamethrower at abortion protest
Witness: Trump grabbed steering wheel, demanded to go to Capitol
More TOP STORIES News