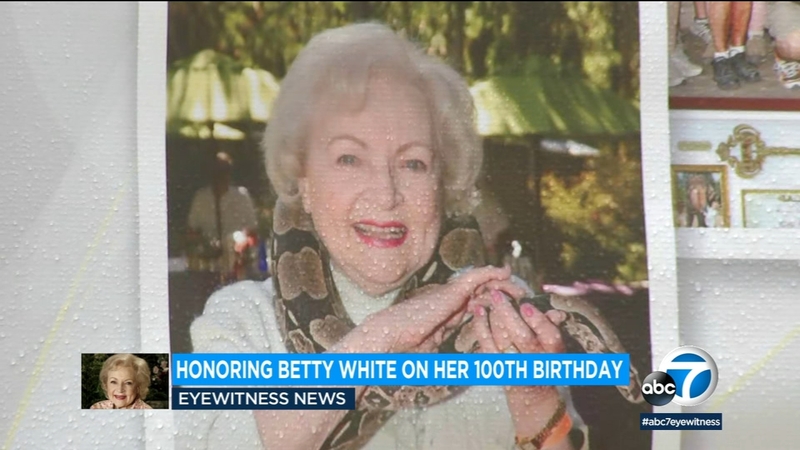 LOS ANGELES (KABC) -- The city of Los Angeles honored legendary actress and comedian Betty White Monday, on what would have been her 100th birthday.

White was a friend and longtime trustee at the zoo, and a fervent animal advocate. She provided her time to help raise money for the zoo.

White died on Dec. 31, 2021, from a stroke she suffered six days earlier, according to her death certificate.

Betty White suffered a stroke six days before her Dec. 31 death at age 99, according to her death certificate.

The "Golden Girl" star loved Pink's Hot Dogs, so on Monday, Pink's donated $3,000 to the L.A. Zoo from the proceeds of its "naked hot dog" sales.

"Betty was not just an advocate for the L.A. Zoo and the animals here, but for animals all over the world," said Tom Jacobson, president of the Greater Los Angeles Zoo Association. "From those in the wild, to those in shelters, guide dogs for the blind, she loved all animals, large and small."

"Something feels a little incomplete here today, not just at the zoo, but in Los Angeles. That's the loss of an angel here in the city of angels, our dear friend, Betty White," said L.A. Mayor Eric Garcetti. "I knew we were all looking forward to celebrating 100 years with her. I've been here so many times with Betty.

Fans everywhere are saying happy birthday by participating in the Betty White Challenge and donating money to their favorite animal charities.

"The words that come to mind when I think about Betty are 'entertainment legend,' 'animal advocate,' and she was a member of the Los Angeles Zoo family for decades, as you've heard," said Denise Verret, director of the L.A. Zoo and Botanical Gardens. "Betty was our biggest champion and she worked tirelessly on behalf of the Los Angeles Zoo, and the animals that call the zoo home."

"We have been selling Pink's 'Betty White naked dog' for well over a week," said Richard Pink, of Pink's Hot Dogs. "We're giving 100% of the proceeds to the L.A. Zoo, which Betty, of course, loved. She loved it more than, I think, she loved hot dogs."

White was a familiar face to television audiences for decades, but was perhaps best known for her roles as Sue Ann Nivens on "The Mary Tyler Moore Show" and Rose Nylund on "The Golden Girls." Her most recent roles were playing Elka Ostrovsky in "Hot in Cleveland" and hosting the practical jokes show "Betty White's Off Their Rockers."