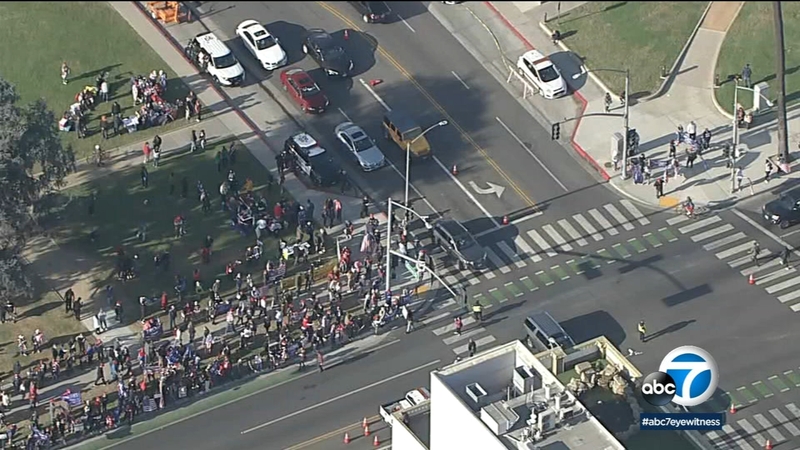 AIR7 HD was over the scene at the intersection of North Beverly Drive and Brighton Way before authorities dispersed the pro-Trump crowd. It was one of several Trump rallies that have been held over the past few weekends in the area.

Supporters waved flags and displayed signs while demanding a recount of votes, with some people walking into traffic lanes.

As Joe Biden and Kamala Harris were projected to win the presidency and vice presidency, Angelenos took to streets and to social media in a reaction mostly marked by celebration.

By 7 p.m., authorities said all streets in the area had been reopened to traffic.

AIR7 HD was over the scene of the pro-Trump rally along Pacific Coast Highway as people waved flags and chanted slogans.

The demonstration turned from peaceful to violent as two women were detained by police after a physical altercation.

Some pro-Biden motorists reportedly drove by the group, shouting anti-Trump slogans at the protesters.

Hundreds took to the streets across Southern California to celebrate after Joe Biden defeated Trump to become the 46th president of the United States. The former vice president positioned himself to be a leader who "seeks not to divide, but to unify" a nation gripped by a historic pandemic and a confluence of economic and social turmoil.

In his first speech after securing the White House, President-elect Joe Biden made an appeal to supporters of President Donald Trump.

Biden said Saturday night in Wilmington, Delaware, that "this is the time to heal in America" and pledged to be a president to represent even those who didn't support him