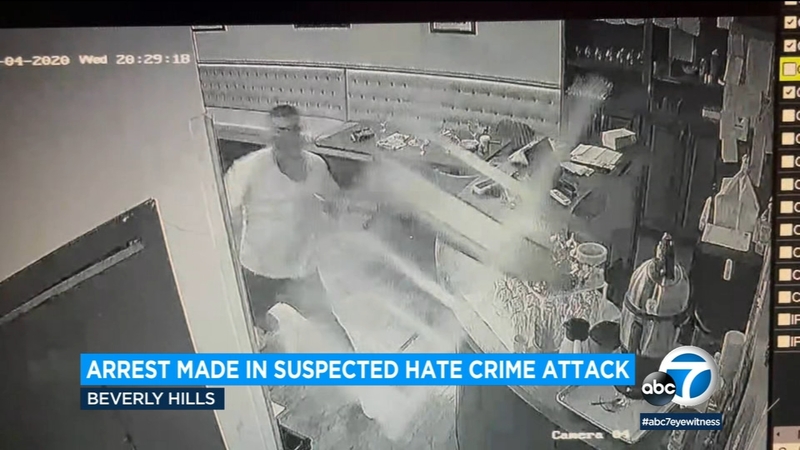 LOS ANGELES (KABC) -- Two Southern California men will be serving time behind bars for a hate crime attack on a family-owned Turkish restaurant in Beverly Hills back in 2020.

William Stepanyan, 23, of Glendale was sentenced Monday to five years in federal prison, and Harutyun Harry Chalikyan, 24, of Tujunga was sentenced to 15 months in prison.

The crime occurred at the Cafe Istanbul, in the 300 block of South Beverly Drive, about 8 p.m. on Nov. 4, amid escalated tensions in Turkish and Armenian communities in response to a war breaking out between Armenia and its Turkish-backed neighboring country, Azerbaijan.

According to the U.S. Justice Department, Stepanyan and Chalikyan, who identify as members of the Armenian American community, targeted the restaurant because they considered it symbolic of Turkey, and when they arrived, "stormed inside, threw hard wooden chairs at the victims, smashed glassware, destroyed a plexiglass barrier, and overturned tables."

They also threatened to kill the victims, said the DOJ.

Officials say Stepanyan had sent a text message earlier that day saying that he planned to go "hunting for (T)urks," before deciding to drive to the restaurant with several other individuals.

During the attack, three people were hurt, "including one individual who lost feeling in their legs and collapsed multiple times due to the injury," DOJ said.

One of the assailants was seen on security camera ripping out the restaurant's computer terminals, and officials say one of the victim's phone was even stolen in the attack.

"These defendants were driven by hate, and their actions were deplorable," said United States Attorney Tracy L. Wilkison. "The physical injuries and emotional trauma to the victims cannot be understated. We hope that the sentences handed down today will help vindicate those harms."

"The victims in this case were brutally attacked by the defendants who trampled their civil rights and likely caused lasting psychological pain for nothing more than the perception of where they were born," said Kristi Johnson, the Assistant Director in Charge of the FBI's Los Angeles Field Office. "The FBI is committed to investigating civil rights violations and holding accountable individuals who commit violent acts motivated by hate."