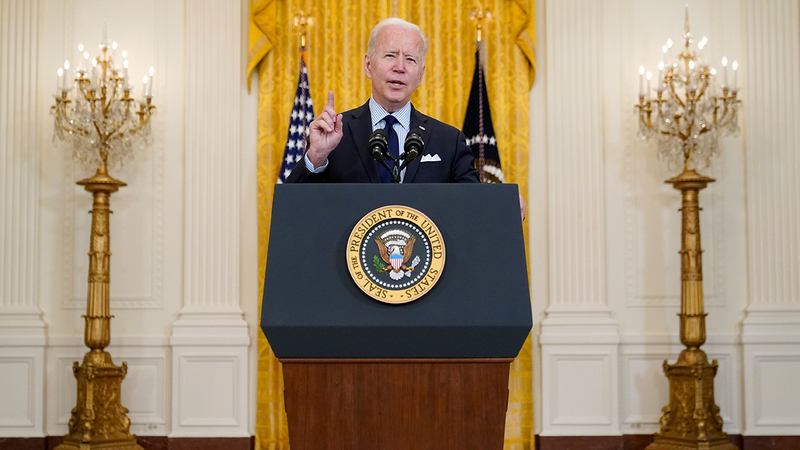 CLEVELAND, Ohio -- The White House on Friday will propose a $6 trillion budget for the 2022 fiscal year, a senior administration official tells CNN, as President Joe Biden prepares to outline his spending blueprint for the first time in his formal request to Congress.

The budget proposal calls for the most sustained spending in more than a half-century, which forecasts deficits at more than $1 trillion for at least the next decade. The budget proposed by the White House is the President's opening offer to Congress in negotiations over the federal budget and is expected to change before being signed into law.

Congressional Republicans are already sounding the alarm about the Biden administration's spending plan and deficits -- a point they rarely discussed during the Trump administration -- as the question of the size and scope of economic recovery looms large in Washington.

The budget proposal, which will be submitted on Friday, calls for spending to increase to more than $8 trillion by 2031.

The President has already outlined two sweeping proposals -- the American Jobs Plan and the American Families Plan -- to remake the social safety net in the US. The budget fills in some of the gaps, but also highlights the projected deficit.

The New York Times was first to report the budget proposal.

President Joe Biden on Wednesday outlined a $2.3 trillion plan to reengineer the nation's infrastructure over the next eight years in what he billed as "a-once-in-a-generation investment in America" that would undo his predecessor's signature legislative achievement of giant tax cuts for corporations in the process.

Mike Donilon, senior adviser to Biden and one of his closest aides, made the case for Biden's sweeping proposals in a memo to allies on Thursday and said: "As we turn the page on this dark chapter in America's history, we stand at an inflection point about what kind of economy -- and country -- we want for ourselves and for future generations."

"The American people understand that the economy we had before the pandemic left far too many people behind, and that more and more families were finding that their grip on a middle class life -- and the security it affords -- was precarious. They know we can't afford to simply turn the clock back to where we were," Donilon said.

In addition to the American Jobs Plan, the President has put forward a $1.8 trillion American Families Plan, a massive package that would invest in education, childcare and paid family leave. The President intends to finance that package by hiking taxes on the rich, saying he wants to reward work, not wealth.

The two packages are aimed at helping the nation's economic recovery in the wake of the coronavirus pandemic. Biden's economic speech Thursday will be at Cuyahoga Community College, which is the site of the last rally Biden was scheduled to hold when he was running for president in March 2020 before the pandemic shut down the nation, according to a White House official.

Biden is expected to highlight on Thursday how far the country has come in its response to the pandemic, as 50% of American adults are now fully vaccinated against COVID-19.