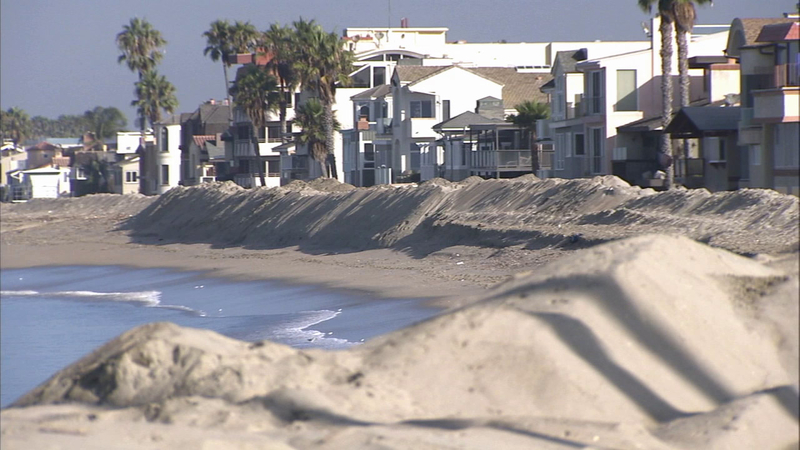 LONG BEACH, Calif. (KABC) -- A storm surge from a hurricane hundreds of miles offshore is expected to bring rough surf and high water to the Southern California coastline over the next several days. Swimmers and surfers are being warned of the dangerous conditions and homeowners are preparing for the worst.

Hurricane Marie was weakening off of Mexico's Pacific coast, but it's generating large, dangerous swells that were approaching Southland beaches. The official high surf advisory began at noon on Tuesday. The waves are expected to get as big as 10 to 15 feet by the end of the week.

Extra lifeguards were expected to be brought in to deal with the peak of the swell on Wednesday.

On Tuesday, a surfer in his 50s died after lifeguards pulled him out of the water in Malibu. It is unknown if the death was connected to the high surf, but lifeguards warned inexperienced swimmers to stay away from the beaches this week.

Several suffers needed to be rescued and one was hospitalized with a broken arm.

The Malibu Pier was closed to the public due to the high surf. Some pylons supporting the pier were damaged by incoming waves.

High surf conditions have prompted the closure of beaches in the city of Rancho Palos Verdes to the public from Tuesday through Friday.

Portuguese Point, Sacred Cove and Inspiration Point will be closed through the week, according to the L.A. County Sheriff's Department.

Abalone Cove Beach will remain open and L.A. County lifeguards will be on duty there, though the beach remains subject to closure if surf conditions worsen.

In Newport Beach, parking at the Balboa Peninsula was limited. Authorities warned the public of heavy traffic in the area.

Flooding was also a fear. Residents in threatened areas were building sand berms and filling up sand bags.

Some people in the Belmont Shore Peninsula area were concerned because Alamitos Bay is on one side and the ocean is on the other. Residents say they will be watching the waves from a distance, hoping the water stays on the other side of the sand berm.