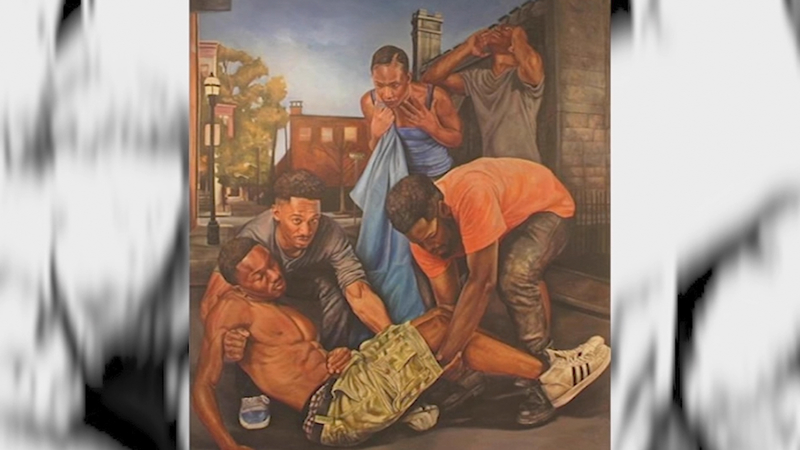 JERSEY CITY, New Jersey -- A young artist from New Jersey is using powerful paintings depicting Black culture, and his latest work has been seen by thousands of people on social media.

Tyler Ballon is determined to represent the norm in a way that provokes thought and questions the things we accept in society.

The common thread in the 23-year-old's paintings is biblical themes featuring African Americans.

"I grew up loving the masters, but there was a huge disconnect for me because I saw no one who looked like me," he said. "I choose to make it my life's purpose to add Black bodies to that narrative, to push them to the forefront of those conversations and see them as Biblical images that we can respect as well."

One such painting depicts Christ being gun downed in the streets. Ballon created it two years ago, but now, with the current climate of racial tension in the country, it's received new praise.

Snoop Dog and Ice Cube are among the many thousands who shared the liked image on social media.

"I felt like it was always something that I was doing, speaking to those issues even before things came to the surface," he said. "The way it is now, I felt like I was always on the journey."

His work is front and center at City Hall in Jersey City.

A graduate of Maryland Institute College of Art, Ballon is an independent artist who hopes to one day partner with the right gallery.

It wasn't until high school that he took his craft seriously, but as early as Pre-K, it was clear he was a standout.

"Everyone used to come around my table and say, 'Ahhh, I can't believe you did this,'" he said. "I knew I had a gift early."

He said he intentionally creates large scale pieces because it forces people to deal with the subject matter in a much different, more powerful way.