Black families own homes at a lower rate than white families in SoCal. Here's why that matters

Nationwide, homeowners' net worth is 40 times greater than renters. But for families of color, homeownership is harder to reach.
KABC
By Anabel Munoz and Grace Manthey 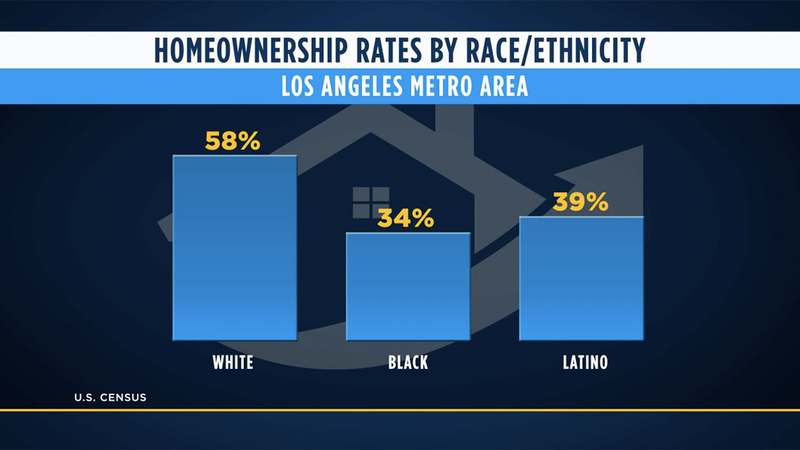 Homeownership rates are unequal across SoCal. Here's why that matters

LOS ANGELES (KABC) -- Registered nurse and Inglewood native Kenya McClendon said she has been looking for a house for about a year.

"I'm at the point of desperation," McClendon said. She said she's been accepted for a loan but has been outbid on every house she's looked at. So far, she estimated that she's looked at about 15 homes.

Dolores Golden, McClendon's real estate broker and the CEO of the Multicultural Real Estate Alliance for Urban Change, said prices have "gone off the roof."

"What was here last week has changed this week. And there's multiple offers on everything. So, buyers are just in there in an auction mode now. And they're not used to that," Golden said.

The market has made it difficult for people like McClendon to buy a home in her own community.

"I feel that people who are not from the community, it's easier for them to come and purchase a home than it is for me, and I grew up in the community," she said.

As an African American, McClendon said it seems like "we require more than the standard requirement."

HOMEOWNERSHIP MEANS 'ANCHORS IN THE GROUND'

In the Ventura metro area, 70% of white households own homes versus about half of Black and Latino households.

In the Riverside-San Bernardino metro area, about 72% of white households own homes, versus about 43% of Black households and 57% of Latino households.

Within these areas of Southern California, some of the gaps are even bigger.

Homeownership rates in Southern California, by ZIP Code
Click on a zip code boundary for more information
Map not displaying correctly? Click here to open in a new window.

"The gap between Black and white homeownership is a representation of actual family wealth," said Mark Alston, a mortgage broker and owner of Alston Associates Mortgage Company, which provides mortgage financing mostly for those with low to moderate income. Alston said the majority of his company's clients are Black.

Buying homes, especially in communities of color, should be prioritized, Alston said, because it's how families build wealth.

"That's where I find foundation begins, that's how we sink anchors in the ground. That's how families become strong," he said.

Alston started his company about two decades ago with a refinance of his own home. That refinance also allowed him to send his children to college, he said.

Nationwide, homeowners typically have a net worth 40 times more than renters, according to data from the Federal Reserve. White Americans have almost eight times the net worth of Black Americans.

Homeownership is not just about wealth, according to real estate broker Dolores Golden. She said it allows people to have a stake in the community.

"It gives them something to build on, they've got a yard they can go in, they can have their friends over. That's real important. So bridging that gap is key. It's key to everything," Golden said.

TODAY'S REALITIES ARE 'A RESULT OF YESTERDAY'S POLICIES'

Experts said part of the reason for the homeownership gap is racist policies that date back decades.

Racially restrictive covenants were restrictions written into contracts, typically a deed to a house, that made it impossible for a person of color to buy the house. Redlining classified communities of color as "hazardous" for mortgage lenders. Housing acts in the 1950s and 1960s displaced hundreds of thousands of families of color.

"There has been targeted actual opposition aimed at Black people and other people of color to make homeownership harder to get, and so what we see as a result, in regards to this gap in homeownership, is just a result of yesterday's policies. They're our today realities," Alston said.

Also, people of color tend to get approved for loans at a lower rate, according to Home Mortgage Disclosure Act data from 2018 and 2019.

There were similar trends in the Ventura metro area and the Inland Empire.

"And I don't understand that, in a system where we pre-qualify, we run credit," Alston said.

"And I truly think it's based on the lack of Black originators, and appraisers and other people in the real estate business that look like the community they represent," he said.

The number of people who even apply for a loan is disproportionate to the population. The Los Angeles metro area is about 6% Black, but potential Black homebuyers made up just 3% of all home loan applications.

"Our borrowers typically require a little more hands-on work. We haven't bought as many houses, we don't have as much in terms of financial investment. So, it takes a little work...sometimes you got to go to their house and help them find documents, you got to talk to them about what a document means and why they need it. And it takes some cultural sensitivity to be able to connect with that borrower to bring down the guard, and say, 'here's how we make this happen,' to get some trust in," Alston said.

Dolores Golden recommends her clients work with a mortgage broker like Alston when they need help with loans because he does things like go to potential borrowers' homes to help them find paperwork. She said Alston is "the best."

"Mark's been doing loans for a long time. And I tell you what, back when I started, if Mark was doing your loan, whatever you asked him, he pulled out his little black book, and he'd say, 'Oh, this is right here. It's in," Golden said.

Many of her clients work two or three jobs, she said. So, Golden spends a lot of time making sure they understand what's needed of them.

Kenya McClendon, one of Golden's clients who is looking for a house, said it's important to have someone she can identify with helping her through the process of buying a house.

WAYS TO CLOSE THE GAP

Resources and education for Black homebuyers is what CalHFA's Building Black Wealth campaign is designed to do, as an initiative to increase Black homeownership in the state.

"I feel pushing the resources like HUD certified counseling to actually educate these people on how to get it done and having that support that's needed is very crucial to actually reaching the goal of homeownership for this community," said Ashley Garner, the community outreach coordinator for CalHFA.

Garner said she's passionate about the initiative because she's part of the community they are trying to serve.

"This means my daughter will have an opportunity to go to college and not stress how Mommy's going to pay for it. This means that I can get up and know that I will be in a safe inclusive neighborhood one day with my family and means that I will have generational wealth to be passed down, along with my counterparts in my community," Garner said.

Another way to help close the racial homeownership gap, according to some experts, is by building more homes that are affordable enough for people to buy.

"We just need to get fundamentally more serious about, you know, producing homes more quickly at a lower price point and in greater volume. That is the solution," said Micah Weinberg, the CEO of California Forward, a nonprofit dedicated to addressing policy changes in the state.

"There's no amount of money that can address racial equity in the absence of substantially more homes," Weinberg said. "You can't subsidize people's access to something that doesn't exist."

Alston said building more homes does make sense as a solution, but there might be a trade-off in urban areas like Los Angeles.

As the Public Affairs Committee Chair for the National Association of Real Estate Brokers, Alston has helped come up with three possible solutions that he believes would be steps in the right direction.

One is establishing a national restorative justice down payment assistance fund to help working, credit worthy, Black borrowers who may not have the money for a down payment. Another, is reforming and standardizing school loan calculations for debt-to-income calculations so people like Mark know what they are working with to get people houses and loans.

Those three items are "doable," he said. Alston and others at NAREB think the solutions will "be able to bring new housing to hundreds of thousands of Black borrowers and other borrowers, other underserved communities as well."

In addition, Golden is the CEO of the Multicultural Real Estate Alliance for Urban Change which aims to improve economic conditions in South L.A. by promoting "homeownership, financial literacy, fighting unfair lending practices, unfair legislation, and by supporting the increase of affordable housing units."

Even though the Fair Housing Act made it "equal and fair, supposedly, for the last 53 years. Well, there's been no progress," he said. "Why? Because you cemented in the difference. You had 359 years head start. Now we make it equal. So, it just goes like this," Alston said as he gestured, moving his hands parallel to each other.

"It's great that it's equal. But there's got to be something that provides redress, that provides restitution reform, so that we can have a system that's fair for all Americans."