3 civilians, 4 LAPD officers injured after violence breaks out during demonstration in downtown LA

Some protesters threw objects at officers who responded by firing non-lethal rounds.
KABC
By Leticia Juarez 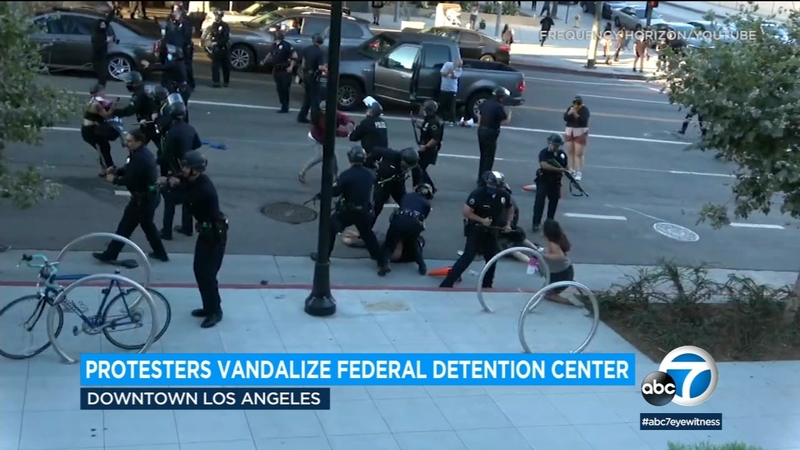 Several injured after violence breaks out during demonstration in DTLA

LOS ANGELES (KABC) -- At least three people and four police officers suffered minor injuries after violence broke out in downtown Los Angeles Saturday during a demonstration in solidarity with the two-month-long protest movement in Portland, Oregon.

The protest took a turn when some individuals smashed windows and spray painted slogans at the Metropolitan Detention Center on N. Alameda Street and threw objects at officers who responded by firing non-lethal rounds.

Two separate demonstrations began in front of Los Angeles City Hall on Saturday afternoon, one organized by the group Refuse Fascism as part of an ongoing series of demonstrations against the administration of President Donald Trump, the other by the Youth Liberation Front.

The YLF protest was part of a daylong action in more than 30 cities to support protesters in Portland, who have demonstrated daily since May 29 against police brutality and systemic racism, and have been in a standoff with federal troops since early July.

All LAPD officers remained on duty past the end of their shifts as part of a citywide tactical alert, and many were sent to the downtown protest.

By the end of the night, four individuals were arrested. Three were arrested for battery on a police officer and the fourth, who police say was in possession of a machete, for causing a disturbance.

"The Los Angeles Police Department is committed to making certain that Angelenos can exercise their First Amendment rights peacefully, and we cannot allow violence and destruction of property to put anyone's safety at risk --- whether they be officers, demonstrators, or bystanders," read a written statement from Chief Michel Moore.

Police and protesters clash violently in Austin, Seattle, Aurora and Portland over the weekend.

After leaving Los Angeles City Hall around 5:30 p.m., the crowd marched to LAPD headquarters at First and Main streets. There they shouted at the two front desk officers, while someone spray-painted red Xs on exterior display cases containing LAPD badges.

Up until the group reached the Metropolitan Detention Center, the protest had remained largely peaceful.

But it was at the federal prison that some demonstrators ramped things up a notch, smashing three window panes -- one kicked in, another smashed with a skateboard, writing FTP'' -- a profane anti-police slogan -- across adjacent windows and blacking out part of the facility's emblem with spray-paint.

At some point on Saturday, protesters made their way onto the 101 Freeway, blocking some lanes of traffic in both directions but later cleared the roadway, allowing traffic to flow again.

Another demonstration was planned for Sunday afternoon outside the Federal Building in Westwood.

When you bring hammers and bats, you’re a rioter, not a protester. We will work with our federal, state and local partners to identify and bring federal criminal charges against those who destroy federal property or assault federal officers. @USAO_LosAngeles pic.twitter.com/JJLJN5bj28

U.S. Attorney Nick Hanna tweeted Sunday that charges would be brought against those who destroyed federal property or assaulted federal officers.