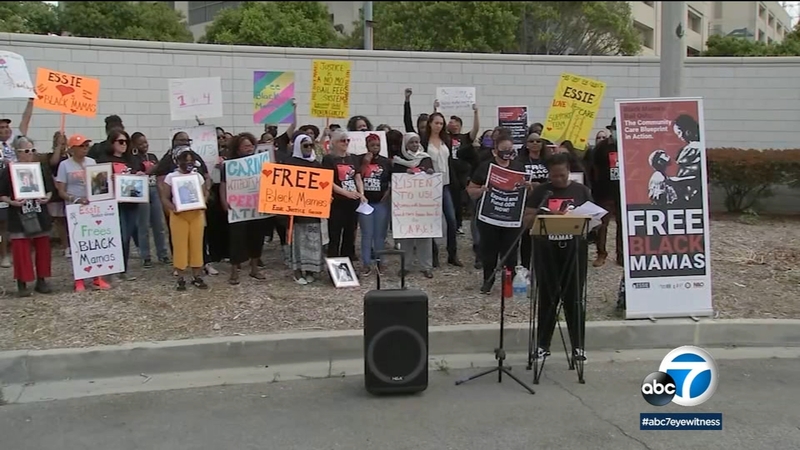 LOS ANGELES (KABC) -- Several organizations are highlighting the experiences of Black mothers who have been incarcerated and are calling on the Los Angeles County Board of Supervisors to fully fund alternatives.

Amber Sam is a mother of four and Southern California native advocating for alternatives to incarceration, an experience she lived first-hand. "I n March of this year, I was arrested when housing insecurity made me unable to report for probation. Instead of being given resources for my family and I to be safe and well, I was given handcuffs in front of my three-year-old daughter," said Sam during a rally near a women's county jail in Lynwood.

Sam could have spent Mother's Day in a jail cell, but three weeks ago nonprofit Essie Justice Group paid her bail. "Essie Justice Group has changed my life by bailing me out," she said. "They spent $50,000 straight to the jail and bailed me out and gave me a second chance at life, basically."

She now has a job, housing, and is working toward getting her children back. As budget hearings begin this Tuesday, Sam is also joining several organizations urging the L.A. County Board of Supervisors to fully fund alternatives to incarceration, while uplifting the experiences of Black women who have been incarcerated.

"If I was in custody, there would have been a completely different outcome to my story and my case," she told Eyewitness News.

"We're asking for about $237 million to go to 3,600 mental health beds for resources to fully fund mental health services, as well as a pretrial services agency," said Gina Clayton-Johnson, founder and executive director of the Essie Justice Group. For the last five years, the group has helped pay for Black mothers' bail in time for Mother's Day.

On Mother's Day, the organization "Operation Warm Wishes" provided a pancake brunch for mothers without a home and families in need.

Among the county's measures for alternatives to incarceration is a new Justice, Care and Opportunities Department, an effort led by Supervisor Sheila Kuehl. Existing services will fall under it, and funding -- as restructuring takes place -- is being assessed.

Kuehl told Eyewitness News in a statement: "In adopting the motions in February to establish a new Justice Care Opportunities Department, the Supervisors decisively laid the foundation for a dramatic shift in the ways in which we address mental illness, substance abuse, housing insecurity and joblessness-- underlying circumstances that often lead to arrest and incarceration. As a first step, we will bring existing programs and funding streams into the new department and, then, identify where the gaps exist that require additional funding. That process, which is underway but not yet complete, ensures that we are not duplicating services in different departments and using funding streams efficiently. I expect additional allocations to be made in the fall during the supplemental budget part of our annual cycle."

Essie Justice Group said that since 2017, it has bailed out 12 Black mothers in California and the cost has been more than $1.9 million.

"There's something wrong with those numbers," said Clayton-Johnson. "That's because in California, our median amount is $50,000."

The organization said the money they raise is part of a revolving fund, given that bail is returned once a case is completed.

"What people really need is services," said Clayton-Johnson. "What people need is support and not to be just left in a cage by themselves."