Crews had been concerned that the excessive heat would trigger more destruction. By Friday evening, the Lake Fire was 12% contained and had charred 17,482 acres.
KABC
By Jade Hernandez
LAKE HUGHES, Calif. (KABC) -- A massive fire burning near Lake Hughes in the Angeles National Forest flared up Friday afternoon as a blistering heat wave descended on Southern California.

Crews had been concerned that the excessive heat would trigger more destruction. By Friday evening, the Lake Fire was 12% contained and had grown by several thousand acres, with 17,482 acres scorched.

The blaze was also moving in the direction of the California aqueduct but firefighters ramped up efforts to try and stop it from jumping to the other side into Fairmont where there are more properties.

"It's going to be triple digits out here on the fire line. That's going to be a huge factor... So we have to take care of ourselves. It's also conducive for fire weather," Jake Miller with the L.A. County Fire Department said Thursday evening.

Hundreds of firefighters from the Angeles National Forest, L.A. County Fire Department and several other agencies have been battling the flames, which have consumed huge chunks of the area's rugged slopes.

The Lake Fire was first reported Wednesday afternoon near the intersection of North Lake Hughes Road and Pine Canyon Road and exploded in size, from hundreds of acres to 10,000 after a few hours. Flames raced across ridges and steep slopes.

Fire officials said flames were in some areas that had not burned since 1968.

Officials warned the fast-moving brush fire near Lake Hughes could flare up again as a blistering heat wave descends on Southern California.

Download the ABC7 Los Angeles app on your iPhone or Android device to get the latest updates on the Lake Fire.

Evacuation points were set up at Highland High School at 39055 25th St. West in Palmdale and the Castaic Sports Complex at 31230 Castaic Rd.

Officially, fire authorities have said at least three structures were destroyed. But Eyewitness News observed the ruins of a larger number, possibly a dozen or more buildings damaged or destroyed in the area near Pine Canyon Road. An official assessment of the damage is still underway as the firefight continues. 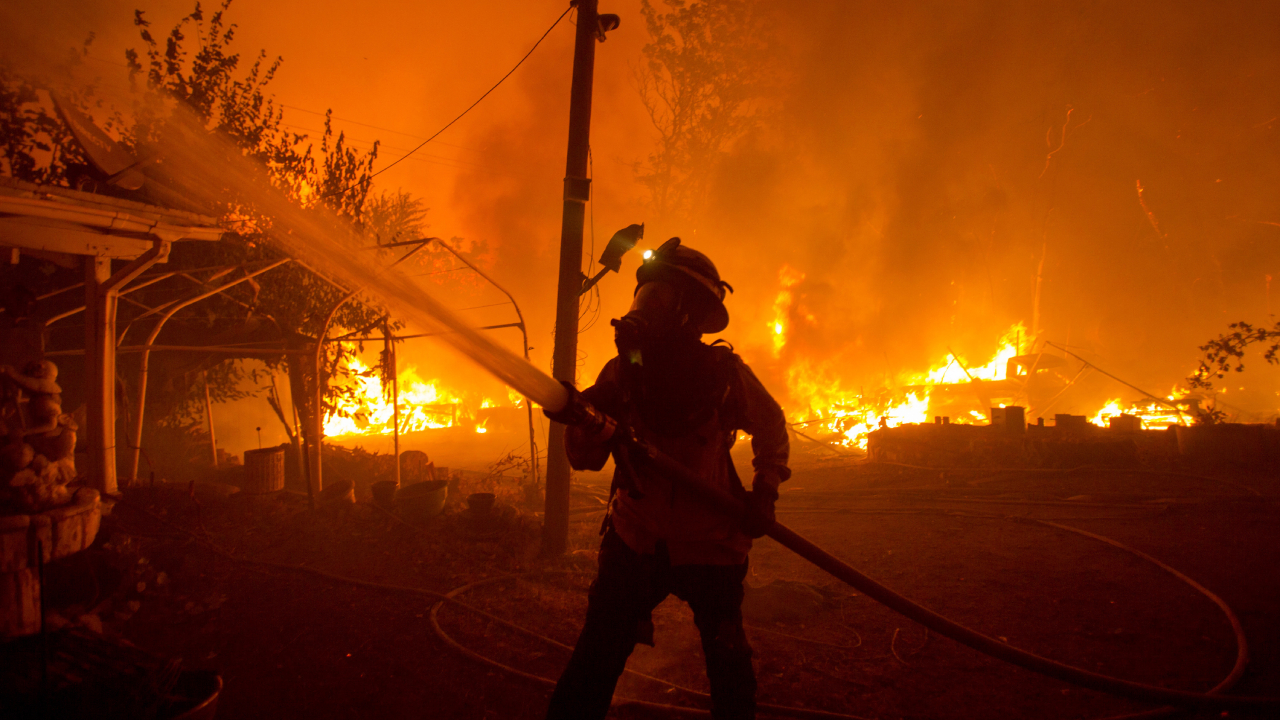 A firefighter works against the Lake Hughes fire in Angeles National Forest on Wednesday, Aug. 12, 2020, north of Santa Clarita.

No injuries have been reported so far.

A statewide Flex Alert calling for Californians to voluntarily turn off their lights and help conserve electricity will be in effect Friday afternoon as dangerous fire conditions are expected through the weekend.

When the fire first erupted Wednesday, it created enough force to make several "fire tornadoes" and flames created an enormous column of smoke seen dozens of miles away.

Evacuation points were set up at two locations in Lake Hughes as the Lake Fire threatened thousands of structures and prompted evacuations for at least 100 structures.

The cause of the blaze is under investigation. An area believed to be the origin point was blocked off with red tape. It's one of several wildfires burning in the region.

Firefighters battled a fast-growing brush fire that quickly spread to 400 acres near Lake Hughes in the Angeles National Forest.