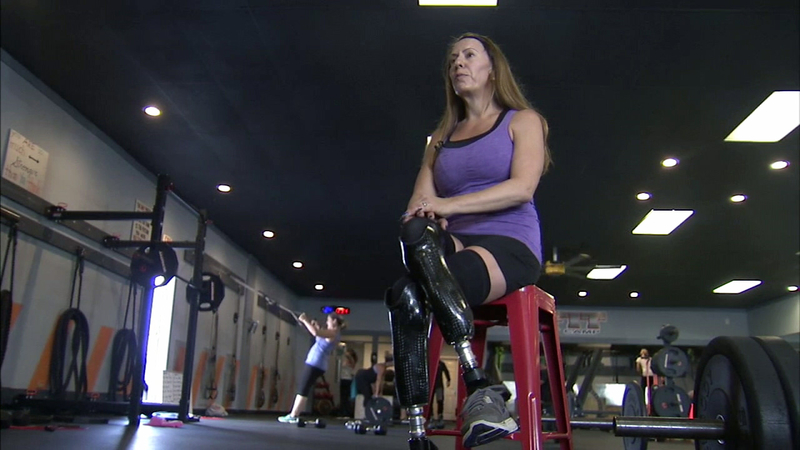 HUNTINGTON BEACH, Calif. (KABC) -- Jami Marseilles puts in at least seven hours a week at the UltraFit Boot Camp gym in Huntington Beach as she prepares to run in the Boston Marathon.

"I've been training, I like to say, my whole life," said the 47-year-old kindergarten teacher at Eisenhower Elementary School.

Marseilles' life almost ended in 1987 at age 19. She and her friend Lisa were driving home after a ski trip when they became lost on a deserted logging road during a blinding snowstorm in Northern Arizona.

They tried to walk for help after the storm ended, but the snow was too deep. The friends returned to their vehicle and were stranded for 11 days.

"I did everything I could to stay in survival mode," recalled Marseilles.

With no food and only drinking melted snow for water, the two were finally rescued by passing snowmobilers. Marseilles said they were dehydrated and barely alive.

"We had frostbite on all of our extremities," Marseilles said.

Marseilles' legs could not be saved after gangrene had set in.

"My amputations happened about half way up my calf," Marseilles stated, pointing to her legs, now covered by prosthetics.

Driven to be more healthy, Marseilles started hitting the gym and then began running after she was fitted with special prosthetics or "Cheetah" legs.

She had never run before having the special prosthetics. Inspired in 1996, after watching the Paralympics Games, she became a professional Paralympics runner for three years.

Marseilles is currently the only "double below the knee amputee" woman in the world to have successfully completed a half marathon and full marathon.

The wife and mother of two, is now about to tackle Boston. Marseilles said she's been mentoring survivors of the Boston tragedy.

"One of the biggest facets I've discussed with them is, 'Yes you've lost part of your limbs, but you haven't lost your life,'" said Marseilles. "Sometimes it takes a little while to get your passion back and to know what your new normal is going to be."

Her trainer, Mike Cahl, owner of UltraFit Boot Camp, said her hard work gets others moving.

"A lot of people who are on the line of working out, they see Jami and it's like, 'Man I can do this,'" said Cahl. "She's an inspiration to a lot of people."

Marseilles said she keeps a glass-full kind of attitude to life.

"Each day is a challenge, but if you get to wake up and you can choose to put a smile on your face and go out into the world and make a difference, then you are a true testament to the human spirit and how strong we really are," Marseilles said.

Officials estimate 30,000 runners will take part in the Boston Marathon on April 18.