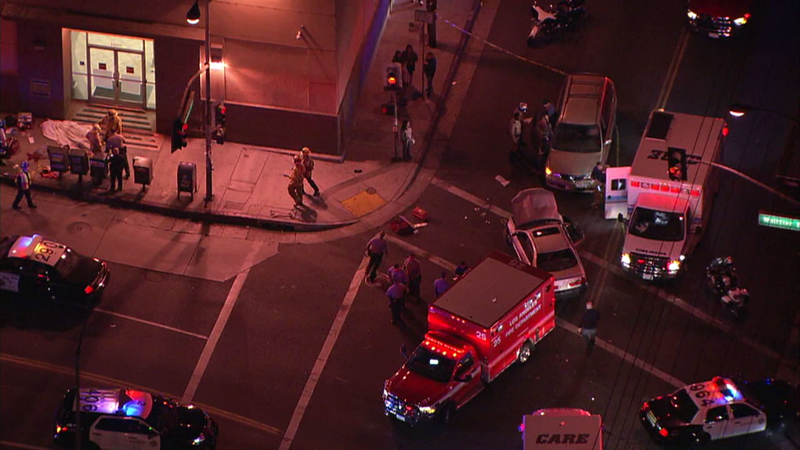 The Los Angeles County Sheriff's Department SUV rushed to an emergency call of a gunshot victim around 7:25 p.m. when it struck five pedestrians on the southeast corner of Indiana Street and Whittier Boulevard, according to LAPD officials.

A Los Angeles County Sheriff's Department SUV is seen near the site of a fatal collision in Boyle Heights on Thursday, Nov. 16, 2017.

One minor died at the scene and the other four pedestrians were taken to a hospital. A second minor succumbed to their injuries at the hospital, authorities said.

"I was inside in my home and I heard the crash. Within seconds, I was outside and just a few feet from the incident. When I got there I saw a little boy with a white blanket over him. Another one across, I'm not sure if he was conscious or not, but it didn't look like he was," Paulette de la Cruz said.

Two sheriff's deputies were transported to a local hospital for medical treatment and would be released Thursday night, authorities said.

Two other vehicles were also struck in the collision and those drivers did not suffer any injuries.

The SUV was visible at the scene with heavy damage to its front right wheel and skidmarks visible on the nearby street and sidewalk.

A Los Angeles County Sheriff's Department vehicle with front-end damage is seen at the site of a fatal collision in Boyle Heights on Thursday, Nov. 16, 2017.

Authorities said all the drivers remained at the scene and were part of the multi-agency investigation.